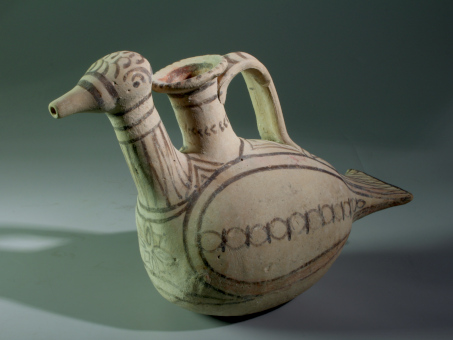 Description:
A jar in the shape of a bird, possibly a duck, with its beak acting as a spout. On the back of the animal is a handle, leading to a funnel with a strainer inside. The whole body is decorated in shades of dark brown and red, using geometric patterns like circles, squares, crosses and triangles; on the chest a floral design.

An askos is a closed vessel with an out-turned rim, a conical to straight neck, a globular to low rounded body, and with a handle on top of the body. It can have a theriomorphic tail, and often becomes a stylised bird, the body roughly imitating the shape of the animal with the mouth in place of a head. Going one step further, the artists sometimes turned their work into a realistic representation of a bird (see Yntema, p. 343-345 and fig. 231, forms 9A and 9B; p. 356ff. and fig. 243. For the bird askos see also p. 380-381; p. 390, fig. 274).

In the classification of pottery by Yntema another type with bird shape also appears: the strainer. This is a closed vessel with a bag-shaped body, a flat or slightly hollow base, a strainer-tail, and a tall strap handle; opposite the strainer-tail is a bird protome, thus giving the form a duck-like appearance (ibid., fig 231, form 17; fig. 243, form 17B; p. 369, figs. 255-256).

Condition:
Intact, with only a small restoration of a chip at the tip of the beak; there are a few very small surface chips, as shown; in very fine condition, with original colours.