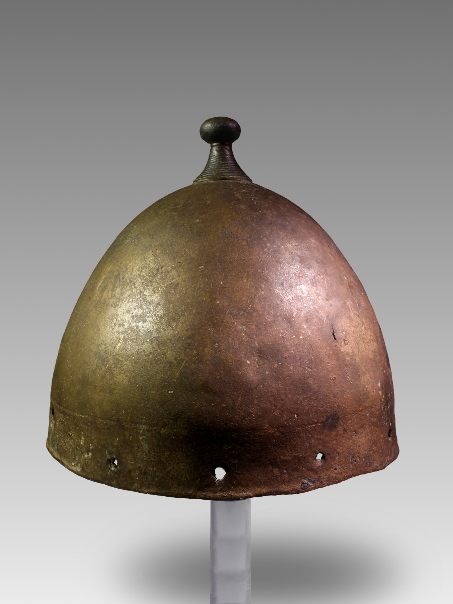 Description:
This is an extremely rare bronze helmet, dating to circa 1000 B.C., coming from the world famous collection of Axel Guttmann and published.

Bronze Age European metal defensive armour is rare. Mödlinger mentions in an article published in 2013 that from the beginning of the Urnfield culture on (ca. 1300 B.C.), only around 120 helmets, 90 shields, over 60 greaves and 30 cuirasses are known. Concentrating on helmets, she distinguishes Western European, bi-valved crested helmets, and Central and Eastern European helmets; the latter can be classified in conical helmets, cap helmets and bell helmets.

Of the twelve complete helmets, ten were acquired in the past by museums (one of them lost during the Second World War), and only two are in private hands. This is one of those two.

Manufacturing process
In order to make a bell helmet, a disc was first cast with a diameter of about 30 cm and a thickness of circa 4–5 mm. During this process the rivet holes near the rim were also cast (rather than punched out later). Then the disc was gradually deformed into the bell-shaped form via deep-drawing or die forging, applying several cycles of annealing and cold working; hammering traces of this process can be observed on most helmets; X-rays on this helmet show impressions of a round hammer-head. As a result of this process the thickness of the cap varies: the top and the rim are thicker than the area in between. See Mödlinger, p. 170, fig. 11 for a reconstruction of the manufacturing process of the cap.

Any metal remaining from the cast or chiselled off during production of the helmet may have been reused for the knob, and for this specific helmet it is even likely that the rivets (one of these was analysed) were also made of the same alloy.

The knob was made separately, most likely first in wax on a hand-turned lathe. To attach the knob, a hole was punched through at the top of the cap, and then the knob was cast on; it was not welded or soldered on.

The knob on the top of the helmet was decorated with a series of horizontal lines and has a central hole of 0.7 cm for the insertion of a feather or a plume.

Wearing the helmet
Wearing a heavy bronze helmet must have been not very comfortable. Therefore underneath the helmet an inner cap or, more likely, an inlay was used of softer, organic material, possibly leather. This was fixed with rivets inside the helmet. The rim of the helmet has 11 rivet holes, rather irregularly shaped, with a diameter of 3-9 mm and a distance of 55-65 mm. Some of these may also have been used to fasten a chin strap (if this wasn’t attached to the inlay), but their main purpose was no doubt to fix the inlay. In fact, on this helmet it can be shown that the organic lining was also bent outwards, because a band of circa 30-35 mm is visible on the outside of the helmet, from the rim up, where the corrosion slightly differs from the rest.

Find spot
Although the origin or evolution of this type of helmets is still unclear, it may be assumed that their production and distribution centre was in the Carpathian Basin. Mödlinger, unable to find any direct ancestors, believes it unlikely that bell helmets are connected to any Greek helmets, and suggests that they may have been a new, European invention.

The exact find spot of this specific helmet is unknown. Hungary is mentioned in the publications, but always with a question mark. More certain is the fact that the helmet was found not in the ground but in water; this is indicated by the brown metallic patina and the remains of sand found inside the helmet.

Provenance:
Collection of the late Axel Guttmann, in which it carried the inventory number AG 1000. Axel Guttmann (1944-2001) was born in Austria, but grew up in Berlin. He was a passionate collector of many things, but is especially remembered for his vast collection of ancient arms and armour. In his Berlin home the collection was displayed in a museum-like manner, and scholars and collectors were always given access to the objects. He worked together with restorer Hermann Born, who started the series of publications Sammlung Axel Guttmann (Verlag Sammlung Guttmann bei Philipp von Zabern, Mainz am Rhein), consisting of nine volumes.

Condition:
In excellent condition, completely unrestored; there are a few short vertical cracks, and the helmet is covered with pores and other small defects, as can also be seen from the X-ray photograph published in Born – Hansen, fig. 198.