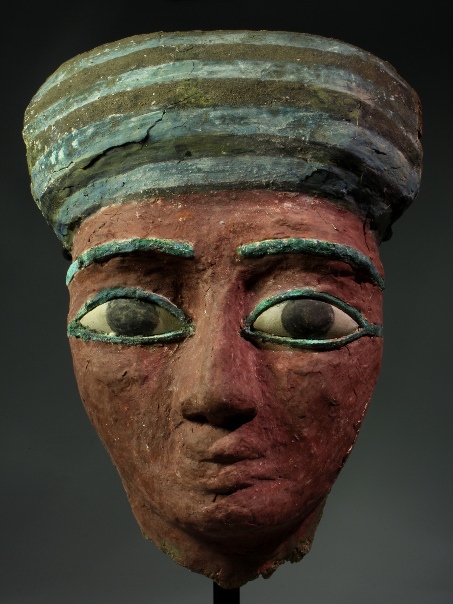 Description:
A large sarcophagus mask, carved of wood, layered with gesso and painted. The face is russet red and the headdress is striped with bands in turquoise and black. The large eyes are inlaid in stone, and the eye lids, with extending cosmetic lines, and eyebrows are inlaid in bronze, which has oxidised to a blue-green colour.

The face has a straight, noble nose, and a small mouth, with heart-shaped and fleshy lips, which is drawn into an enigmatic smile.

The wood has been tested by radiocarbon analysis, performed at the Center for Applied Isotope Studies of the University of Georgia. This has confirmed the ancient authenticity.

Background information::
It is not known exactly what initiated the wish for mummification in ancient Egypt. Possibly the observation that bodies of animals or humans - that had been buried in the sand - had been naturally preserved gave rise to the idea. Although early attempts at artificial preservation were recorded from the Naqada II Period at Hierakonpolis, including the extraction of internal organs and the wrapping of specific parts of the body, mummification proper started around 2600 B.C., during the 4th dynasty.

It was important for the ancient Egyptians to preserve a dead body in as life-like a manner as possible. After treatment of the body, the result was a dried out but still recognizable human form. The Egyptians would make this more life-like by filling out sunken areas of the body, and by adding false eyes. In the 5th dynasty the first attempts were made to suggest the appearance of the deceased. Mummies were then sometimes covered in a thin coat of plaster which was modelled, especially on the face.

The wish to protect the dead body against any harm coming from outside could already be seen in predynastic burials, with mats or baskets being put over the body. The Egyptians now combined both ideas, protection and preserving a life-like appearance, by using the materials that gave the body its life-like appearance for protective purposes as well. They would for example place a mask on the head of the mummy, originally made of cartonnage (layers of linen with plaster) with the facial features modelled and painted, but soon such masks were created from stronger material. The early masks covered the head and extended down the back and over the chest. In the New Kingdom, the wish to reproduce a completely life-like mummy and to protect the body as much as possible led to the development of the anthropomorphic coffin.

The wish to protect the body was connected to the idea that in the hereafter a person would continue his life as he had lived it while on earth, and therefore would need his body. But from a religious point of view it was also necessary that the body was life-like. According to the ancient Egyptian beliefs a human consisted of several aspects, one of them being the body and one of the others being the ba (the aspect of freely moving around, often translated incorrectly as “soul”). It was the ba that would fly out of the tomb daily, usually in the shape of a bird or a bird with a human head, to be “recharged” by the sunlight; in the evening the ba would return to the mummy and rest on it, thereby transferring the energy of the sun to the body.

Condition:
Condition: Expected, age related surface wear and losses to the peripheries as shown, with minor cracks, but the face is remarkably well preserved; some repainting to an area of the headdress and the face. The bronze inlays have oxidised to a beautiful blue-green colour. A few old pegs are visible on the eyebrows.