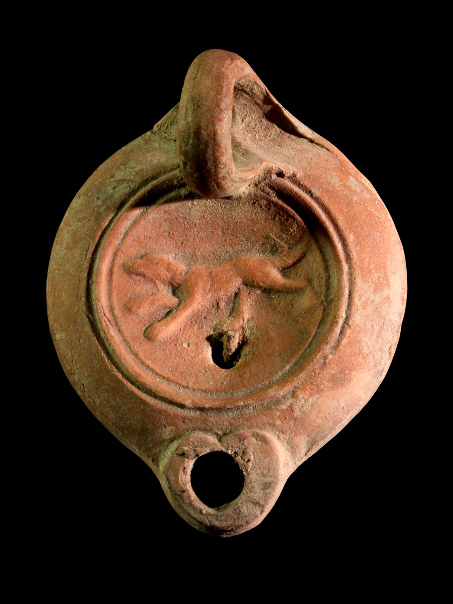 Description:
This is a Roman moulded terracotta oil lamp, coming from the Eastern Mediterranean area, possibly Asia Minor. The discus shows the image of a dog, running to the left, and has a filling hole.

On the base are a couple of concentric rings and an old inventory mark.

In the filling hole the corroded remains can be seen of a wick pin. Sometimes a pin was inserted into the wick through the filling hole, to hold the wick in place. The pin would prevent the wick from sliding down into the body of the lamp and also served to adjust the wick as it was consumed. Such pins were made from rigid materials like metal, wood or bone.

Provenance:
Dutch private collection, acquired from Bonhams, London, around 2002; before that M. Ayers, London, The Old Drury, London (both shops, which ceased trading in 1988), acquired in the 1970s-1980s.

Condition:
Intact with some encrustation, surface wear, scratching and other minor, unimportant damage; an old inventory number "947" written underneath.