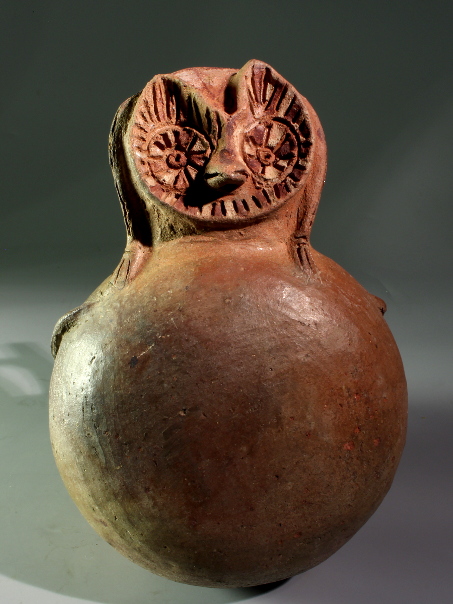 Description:
A small terracotta vessel, pinkish-brown ground with red and white highlights, having a bridge handle and spout. The vessel depicts an owl. The face of the animal is characterised by large circular eyes and other incised details, and is flanked by feathered horns. Wings are indicated on the sides of the vessel. All details are executed in high relief.

For a similar but less detailed object depicting an owl see for example a vessel in the Fowler Museum at University of California, Los Angeles, inventory number X86.3844, or an owl-headed vessel in the Metropolitan Museum of Art, New York, accession number 1978.412.261.

The Virú culture (also known as Gallinazo) was a culture that was based on the north west coast of Peru, in the Virú Valley and extending into the Moche and Santa Valleys. The culture flourished from circa 200 B.C. to circa the fourth or fifth century C.E.

The authenticity of the vessel was confirmed by a thermoluminescence test, which showed that the object was last fired circa 2000 years ago, with a margin of 20%.

Condition:
The head and spout have been reattached with minor restoration over the break lines; else intact; an inventory label underneath; two minuscule holes caused by taking a sample for the TL test.