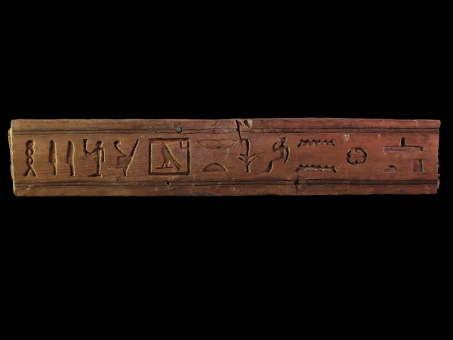 Description:
An ancient Egyptian wood panel with beautifully carved hieroglyphs. The text, reading from left to right, translates as follows: The songstress of Hathor, Lady of Herakleopolis, Hetep ... The last word is the beginning of the personal name of the owner. From other sources we know that her full name was Hetep-Amun.

Provenance:
Collection of Robert Boyd (1828-1914), thereafter by descent and brought to the Netherlands between 1950 and 1962; thereafter Dutch private collection J.V., Wijk bij Duurstede, which was formed between 1960 and 1968; thereafter with Anubis Ancient Art, the Netherlands; thereafter with Explorer Ancient Art, U.S.A., thereafter with Artemis Gallery, U.S.A.
Robert Boyd junior was the son of Robert Alexander Boyd (born circa 1795 in Aberdeenshire, Scotland; died on 11 December 1865 in Soerabaya, East Java). Robert junior was the owner of a coffee plantation in Indonesia. There he was visited by the anthropologist Eugene Dubois around 1890, who became one of his friends. In that period the wood panel came into the possession of the Boyd family. In 1950 Robert junior’s grandson Adam W. Boyd had the choice to go to the Netherlands or to Dutch New Guinea. He chose the latter, and lived there until March 1962, when he went to the Netherlands.

Condition:
Fragment of a larger panel with some age-related damage to the wood, as shown; comes with a custom made stand.