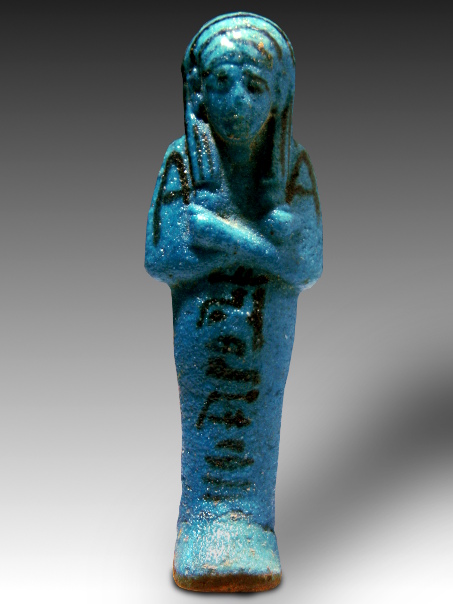 Description:
A shabti with a lovely bright blue colour, in the somewhat crude style that is so typical for the Third Intermediate Period, particularly the 21st dynasty (circa 1069-945 B.C.). The shabti comes from the so-called Second Cachette in Deir el-Bahari.

The owner of the shabti, a woman, is depicted mummiform, wearing a tripartite wig, leaving the ears visible. The arms are folded over the chest, the proper left arm over the right one. The shabti is holding agricultural implements in its hands, in this case two hoes, and has a seed basket hanging on its back. All details were added in black: eyes, wig, implements, seed basket. The same applies to the vertical band of text.

This text indicates the name of the person for whom the shabti was made: “The illuminated, the Osiris Nestanebettawy”. Her name means "She who belongs to the Lady of the Two Lands".

Condition:
Intact with some encrustation and wear.