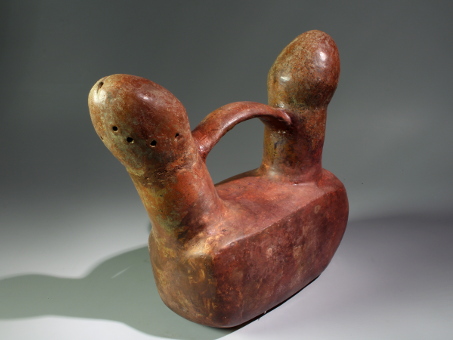 There are several ways of producing a tone, by blowing air into the vessel, by boiling water inside it (so that the steam generates a sound, comparable to what happens with a tea kettle), or by pouring water into it, especially if this consists of two communicating chambers; when these are partly filled with water and the vessel is tilted, the water will flow from one chamber to the other, compressing the air in the lower chamber so that it is forced out through a narrow canal, producing a whistling sound. When blown by mouth into a vessel that is partly filled with water, the vessel will trill. It is likely that whistling vessels with one chamber were always brought to sound in this manner only, as the movement of water in one chamber will not compress the air.

Vicus was a culture in the northernmost part of the Pacific coastal area of Peru; archaeologically the culture is not yet clearly dated, and various sources give different dates, starting somewhere between 1000 B.C. and 200 B.C. and lasting until between 300 C.E. and 600 C.E.

Condition:
Repaired from a few large fragments with some minor restoration where the handle joins the phallus; minor surface damage, scratching and wear and some encrustation. TL tested.