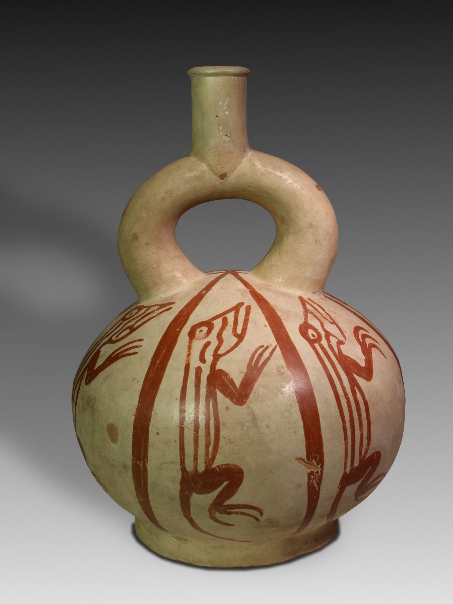 Description:
A terracotta stirrup spout vessel, dating to the earlier phase of the Moche culture, due to the shape of the spout and its thick lip. The ceramic has a globular form and is standing on a low ring base. The body has a cream coloured glazed ground and a decoration highlighted in vibrant red, as is often seen on early Moche vessels. In this case the decoration consists of six lizards, painted vertically in fields separated by vertical lines.

Lizards were important subjects in the Moche iconography (Bourget, fig. 5.184). Certain types of lizards and iguanas were used as food (Gillin, p. 155; Holmberg, p. 206; Shimada, p. 184), not only because of their flavor and nutritive qualities, but also for their reputed aphrodisiacal powers. Another reason may have been that eating certain types of lizards would result in hallucinations, as sought by shamans: some lizards eat the fruits of plants and trees that were knows to induce hallucinations.

Lizards were also symbolic for regenation because they shed their skin. But the iguana was also an important animal in Moche mythology. Moche art frequently shows the depiction of an anthropomorphised iguana, with a lizardlike face and a long pointed tail. This Iguana often appears together with another being, generally called Wrinkle Face. Both are major figures in Moche art (Bergh, p. 86; Donnan – McClelland, p. 6); according to some may represent the power of the earth and of the sea; however, both may also be connected with funerary practices of the Moche, as they are shown on a vessel lowering a coffin into a shaft.

However, it is unclear what the purpose of the depiction on this vessel was.

Condition:
A repair to the spout, professionally done; some minor paint loss, else intact. TL tested.