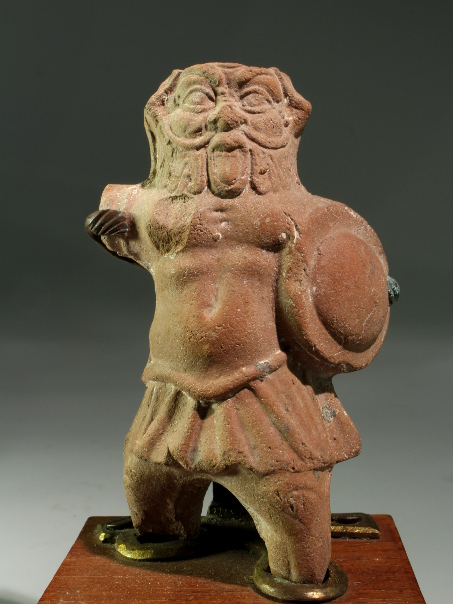 Description:
This terracotta figure of Bes shows him in a way typical for the god, as a bandy legged deformed dwarf (or, more precisely, a lion-man). He has an ugly, grimacing human face with a protruding tongue, wide eyes, and animal hair or manes. He is depicted here in a striding position and armoured, wearing a cuirass over a tunic. Bes carries a round shield on his left arm. Once his proper right arm was raised high, brandishing a sword to ward off danger.

Background information: There are several opinions concerning the origins of Bes, and the meaning of his name (see Malaise 1990, p. 691-692). His name may be related to verbs meaning “to initiate”, “to emerge” or “to protect”. But is has also been suggested that the word indicates a prematurely born child or foetus (which was enveloped in a lion’s skin), making the god Bes the personification of such a prematurely born child, which also helps to explain why he is especially engaged in protecting mother and child (see Meeks 1992; Bulté 1991, p. 102, 108-109; Te Velde 1995, p. 330).

Images of deities or demons holding a knife were relatively common in ancient Egypt. They can be found in funerary compositions, but also in the realm of the living. Well known are depictions of gods wielding a weapon on ivory wands from the Middle Kingdom, but they are also present in the form of amulets and can be found on furniture, such as the legs and footboards of beds, on chairs and headrests. Such deities are usually holding a weapon with their hands, but sometimes also with their feet. Usually they are armed with a knife or sword, but in some cases with other weapons like a spear, a mace or a staff, or even a snake.

In the majority of cases the god depicted is Bes. When his name is mentioned, the frontal Bes often is called Aha, which literally means “the fighter”. It was perhaps in this context that in the Roman period the god was associated with military action, or possibly even adopted as a military god, since he was often portrayed in the costume of a legionary (see Shaw - Nicholson, p. 54).

Provenance:
Collection of Jean-André Périchon Bey, Paris (1860-1929), acquired in Rawdah, Egypt before 1903. Therefter with Tajan, Paris, 14 November 2003, part of lot 91; thereafter with Hixenbaugh Ancient Art, New York; therafter collection of Elizabeth Nutt, New Hampshire, acquired on 21 June 2004; thereafter Harlan J. Berk, Chicago.
Périchon went to Egypt in 1885 to work as a railway engeneer. In 1900, he became manager of a sugar factory in Radwah, Middle Egypt. Abbas II, the last Khedive (Ottoman viceroy) of Egypt and Sudan, awarded him with the title Bey. He was in close contact with two Egyptologists: Gaston Maspero, who wrote a catalogue of his collection, and Gustave Lefebvre; both helped him to build his collection, which was before 1903, the year in which he returned to France. Later afterwards Périchon declared that he wanted to donate part of his collection to the Musée des Beaux-Arts in Limoges, France, which was effectuated in 1931. Other objects from his collection can be found the the Musée du Cinquantenaire in Brussels.

Condition:
Fragmentary as shown, missing the raised arm, both feet and the top of the head; some age related surface damage and wear; mounted on an old (but not ancient) wood base with a rather "heavy" metal support on the back.