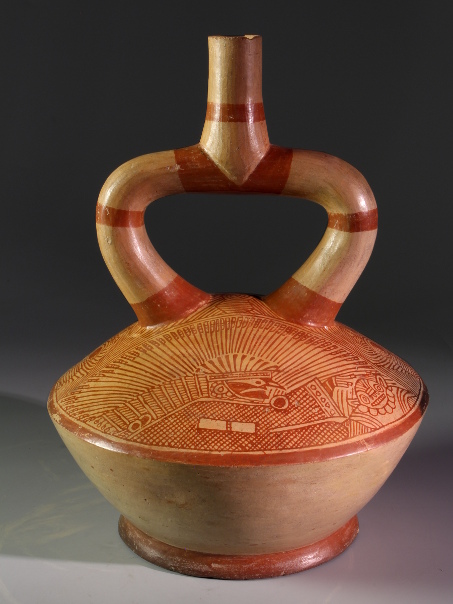 Description:
A pottery stirrup spout vessel, painted cream ground with a red-brown painted fineline decoration. The vessel has identical depictions on either side, showing a figure with a human body, angry looking, a sharp nose or beak, and wearing a semi-circular headdress which is elaborately feathered and might represent sun rays. He is pointing at a figure in the corner of the scene, who is only partly visible and who is bat-headed.

In a central register, next to the point where the vessel connects to the stirrup spout, is a depiction of a large spider on either side; a stylised double spider is visible under the spout.

The central figure in the main scene represents the god Naymlap (also Naylamp), who was said to be the legendary founder of Sican and also the founder of the first dynasty of kings of the Lambayeque valley. In mythology (as first recorded in 1586 A.D. by the Spanish priest and chronicler Miguel Cabello de Balboa in his Miscelánea Antártica, une Historia del Peru Antiguo), Naymlap traveled over the Pacific Ocean on a balsa raft with a large entourage including 40 officials. After he had gone ashore in the Lambayeque area, he became king of the Lambayeque valley and founded a large city, as did his offspring. According to legend, when Naylamp died, he sprouted wings and flew off to another world (Sharpe, p. 18, 65). His image dominates the iconography of Sican, and he is sometimes shown with avian features, such as beaks, wings, and talons (Shimada, p. 52), and it has been suggested that his name is actually Ñañlap, of which the first part is ñañ "waterfowl" in the Moche language.