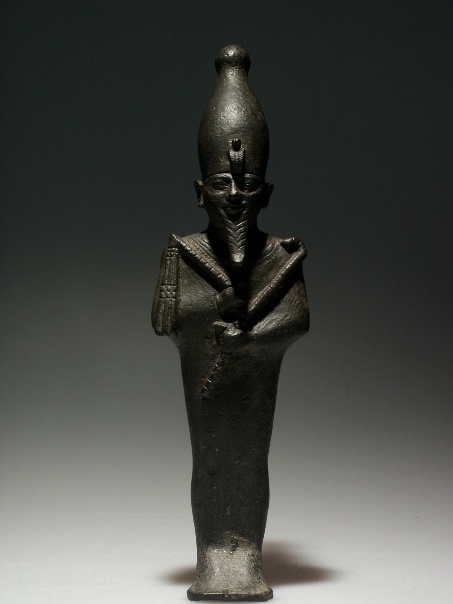 Description:
A large statuette of the god Osiris, depicted in the traditional mummiform pose, his arms protruding from the enveloping shroud. He is holding a crook and flail and wears the white crown of Upper Egypt, which is fronted by a uraeus (a protecting cobra). The false beard has incised details and chin straps are also depicted. The god is adorned with a broad collar, with a pendant at the back. Details of the cobra, the regalia and the eyes and eyebrows are also incised.

This statuette was probably made in Lower Egypt: the right hand, holding the flail, is placed above the left hand which bears the crook; this is the position ascribed by Roeder to Lower Egypt. The way the crook is shown, extending below the left hand, also belongs to the Lower Egyptian tradition.

In the Late Period the god was usually depicted with the atef crown, but the white crown can occasionally also be seen. In the Middle Kingdom Osiris was often (or, according to some, always) shown wearing the white crown - an indication of his Upper Egyptian origin - and although later he often wore more elaborate crowns, especially the atef-crown, the white crown remained one of his attributes. The god was even called prince of the white crown in Ptolemaic texts (on Bigga near Philae, and in Edfu). As a result statues of the god with the white crown were also made, although these are less common. See for example a magnificent sitting Osiris in the Louvre, Paris (inv. no. E 3751).

Provenance:
Collection of Sir Stephen Lewis Courtauld (1883-1967), possibly acquired during the trip he and his wife Virginia made to Egypt in 1936. Sir Courtauld was among many other things financial director of Ealing Film Studios in the United Kingdom, and trustee of the Royal Opera House, London. He was also well known for providing financial support for the Fitzwilliam Museum in Cambridge and for redeveloping Eltham Palace in South East London in the 1930s.