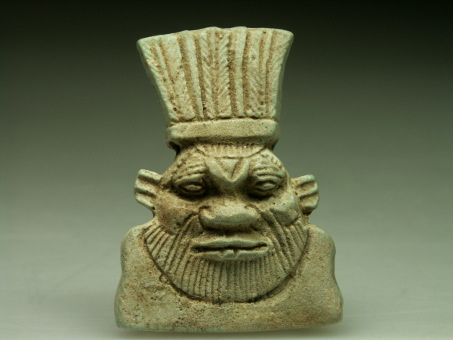 Description:
A wonderfully detailed amulet of the god Bes with a very deep profile. His grotesque and gruesome face was supposed to ward off all dangerous creatures. His beard, feather headdress and lion’s ears add to his un-Egyptian and therefore fearsome looks.

The main task of the god was to give protection, especially in circumstances where dangers were lurking, such as during childbirth or during the night when people were sleeping, unaware of what was happening around them; to protect them, representations of Bes (or similar gods, like Taweret) were put on furniture like beds and headrests. Depictions of the god were also worn as amulets as a general protection against evil.

Bes had also a completely different, solar aspect, as can be seen on so-called magical stelae. There he represents the old sun god, being rejuvenated in the (solar) child Horus who is shown triumphing over forces of evil, represented by snakes, crocodiles and a gazelle.

In fact the god was in fact the personification of a whole group of very similar gods, whose characteristics are too much muddled for us to be able to differentiate them and who, therefore, are all commonly referred to as Bes.

This amulet was intended to be worn, since it was pierced horizontally for suspension. The amulet is unglazed.

Condition:
Intact. Two minuscule indents in the lower lip seem to be ancient and were probably made intentionally, perhaps to indicate the tongue (?). The back side shows some minor roughness and discolouring, most likely due to conditions in the kiln.