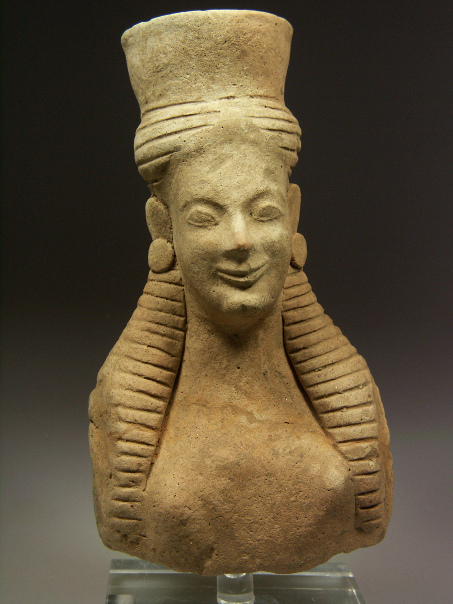 Description:
This is a beautiful example of archaic Greek statuary. It is a fragment of a hollow statue of a woman, possibly a goddess, who sends us a lovely smile. This is the so-called "archaic smile" which is characteristic of the Archaic Period (circa 650 – 480 B.C.), more specifically the second quarter of the 6th century B.C. There have been several explanations for the smile; many think that for the Greeks it reflected a state of well-being, but technical reasons have also been suggested.

Our lady is wearing a high polos headdress on top of her hair, which is arranged in horizontal bands atop her head, with two long tresses falling over the shoulders, marked with horizontally incised bands. She has a long, oval face with high cheekbones, a prominent nose and chin and large almond-shaped bulging eyes. Her ears are adorned with applied disk earrings.

Condition:
Fragment from a larger statue, repaired from a two or three pieces in a professional way; a repair across the chest is hardly noticeable (except when the bust is seen from below, which of course is not a normal position for displaying it); chip on the backside of the polos, not visible when the bust is viewed from the front; mounted on an acrylic base.