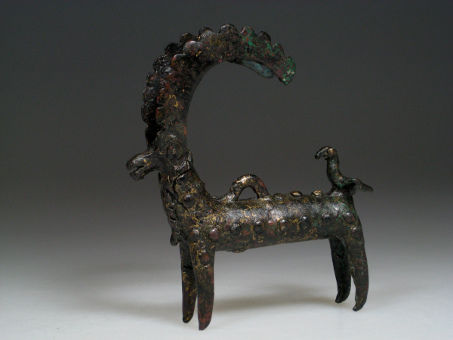 Description:
A wonderful little animal from ancient Iran, from the Amlash region, dating to circa 1000 B.C., published and coming from a world famous collection!

Depicted is a standing ibex (genus Capra) with the huge and distinctly shaped, notched horns that are typical for the animal; in this case the horns are joined by two horizontal bars. A small bird is perched on the hindquarters of the ibex. On the back is also a suspension loop.

The body of the animal is stylised in an almost modern way, with knobs applied on the back, sides, neck and upper legs. The mouth of the animal is slightly opened. Most remarkable is what has been described as the animal’s beard: two braided bundles can be seen running down the neck and chest of the ibex, slightly apart but meeting at the lower end and ending in a pointed shape; the braids start behind the head and therefore it seems unlikely that it is a beard. Perhaps it is a bridle or rope around the animal’s neck, and maybe something is hanging at its end; a bell?

As shown by archaeological discoveries, domestication of these animals (for milk, meat, goat hair and goat skin) started at least 10,000 years ago in the area that is now called northern Iran. Perhaps this is an example in bronze of it.

Condition:
There is what appears to be an old repair to the left side of the neck; tip of the right horn repaired; a miniature (about a millimetre) and shallow opening behind the right braid on the neck. Else intact. A wonderful example of Ancient Near Eastern bronze working.