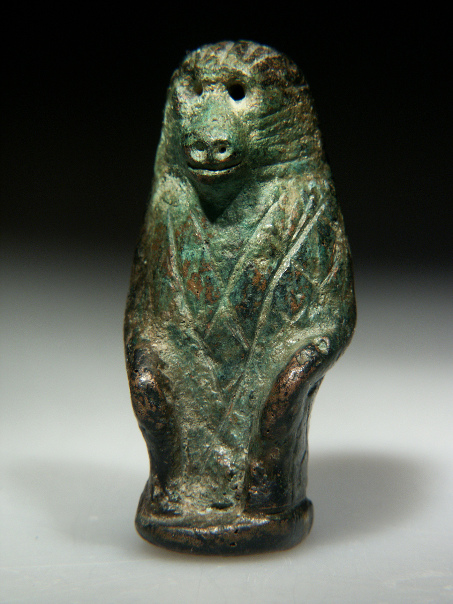 Description:
This is a rare depiction in bronze of what is a common motif in faience: a sitting baboon. The animal is shown on a round base, his forepaws resting on his knees, are drawn close to his body. The face is characterised by deep-set eyes (once possibly inlaid in a different material), arched brows and a dominant, protruding muzzle. The fur is rendered in a stylised manner by large, irregular lozenges.

The baboon was linked to the sun and the moon; the Egyptians thought that the animals had foreknowledge of the sun’s arrival, which they heralded with screams and paw-waving, and similarly must have had knowledge about the moon. Thoth was one of the gods associated with the moon, and thus there was also a relation between this god and the baboon, which became one of his sacred animals; sometimes the god himself assumed the shape of a baboon. Baboon amulets almost always depict the creature with massive mane and squatting with its paws on its knees. The amulet first appeared in Ramesside burials, made from glazed composition which continued to be the usual medium. But later and much more rarely also other materials like bronze were used (cf Andrews, p. 27).

Amulets of another monkey, the maneless baboon, are recorded from the Old Kingdom onwards; usually these made were of stone or glazed composition, but later examples were occasionally also made of bronze; this animal was often depicted as a symbol of love and sexual fulfilment to be enjoyed in the hereafter (Andrews, 66-67).

Provenance:
Dutch private collection; with Jean-David Cahn, Basel (2008); previously collection of the sisters P. and F., southern Germany, who inherited the collection from their father (1970-1990).

Condition:
Intact with a lovely green and red-brown patina; some miniscule pitting, especially at the back. A wonderful piece.