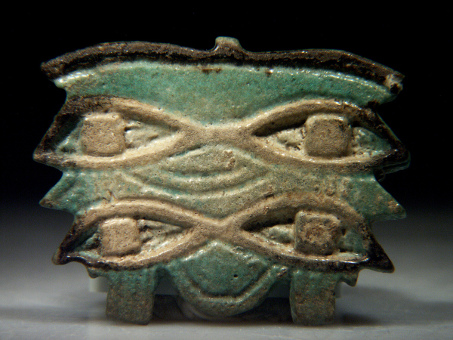 Description:
A very powerful amulet from ancient Egypt, made of a wonderful warm green faience with black accents, a combination of four eyes. The amulet is horizontally pierced for suspension.

One single eye, believed to belong to the falcon-headed god Horus and referred to as the wedjat or udjat eye, was a very popular amulet in ancient Egypt; Andrews (see below) remarks that it is probably found in greater numbers on mummies than any other amulet, and, of course, it could also be worn in life.

Such eyes could also be combined into one. If one wedjat gave protection, multiple wedjats would furnish even more: during the Third Intermediate Period some forms of the amulet, both openwork and solid, comprised four wedjats (two on top of two).

At its most basic the wedjat is a human eye with brow above and markings below; the latter take the form of a drop shape at the front and an uncurling spiral at the back, said to imitate the markings on the head of the lanner falcon, but also mentioned as tears connected with the injuring of the eye. On our eye the brows of the top eyes have been connected; the same applies to the spiral below the lower eyes.

The eye on offer is one of the type that Müller-Winkler calls "zweiseitig gerichtet" (symmetrically orientated to two sides): two rows of eyes, one of top of the other, omitting the markings below the eyes of the top row and the brow of the lower eyes. This type is rare (Müller-Winkler, p. 98) and is especially known from the 22nd-25th dynasties (ibid., p. 146 and p.148-149).

Background information::
The word wedjat or udjat meant "the sound one", referring to the eye of the god Horus after it had been plucked out during one of his battles with Seth, and then healed by Thoth. This Horus was the elder (Greek Haroëris), the celestial falcon and great creator god whose right eye was the sun and left eye the moon. It is generally supposed that the wedjat was the moon eye, which was "injured" as it waned and "restored" as it waxed each month, but the term might just as well apply to the sun eye, the "sound" one as opposed to the "injured" one. When Osiris rose to pre-eminence as the god of the dead, the wedjat became identified with the eye of his son Horus. According to the Osiris myth, Horus offered the healed eye to his dead father and so powerful a charm was it that it restored him to life (Andrews 1994, p. 43-44).

Condition:
Intact with some discoloration, normal surface wear and minimal encrustation; a very small area (2 mm only) at the top right hand corner were the black paint of the brow is affected. Two pieces of tape stuck to the back or the amulet; a piece of modern fibre was put through the ancient horizontal piercing to allow the amulet to hang; this can easily be removed, if required. A very desirable and rare amulet.