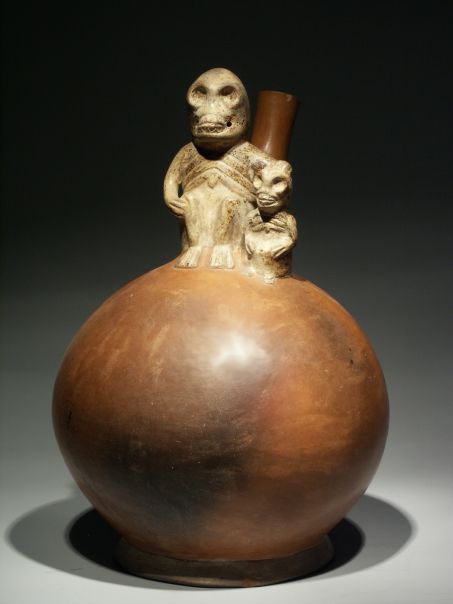 Description:
This is a very remarkable and rather macabre vessel from Peru. It dates to the Moche IV phase, circa 500 C.E.

The unusual scene depicts two skeletal figures. The larger one rests his left hand on the head of the smaller figure (a child?). Both individuals are painted white, and care was taken to add small details, such as the incised ribs, hollow eyes and fingers. The figures are shown squatting on top of an orange coloured terracotta vessel which is footed and has a globular shape. There is a phase IV stirrup spout at the back. Two old inventory numbers are written on the bottom, reading DMM 67 and 71.93.

Although relatively rare, depictions of skeletal individuals can sometimes be found on Moche ceramics. It has been suggested that they symbolise the spiritual complementarity between life and death. Moche religion knew a transitory stage between life and death, of which transitional beings such as the animated deceased were manifestations. In art these can be seen engaged in sexual activities, embracing, making music and dancing and other scenes. Possibly the combination of a skeletal adult and a child illustrates death as a necessary stage for the renewal of life.

Literature:
For the theme of skeletons in Moche art in general see Steve Bourget, Sex, Death, and Sacrifice in Moche Religion and Visual Culture (University of Texas Press, 2006).

Condition:
In excellent condition; a few miniscule chips to the footed base and the stirrup spout; some surface wear and scratches; a small spot of what is probably spilt (ancient?) paint halfway on the spout; the larger figure has a small round opening on his left cheek and shows some minor paint flaking. Two inventory numbers written on the bottom. Two minuscule holes caused by taking a sample for the TL test.