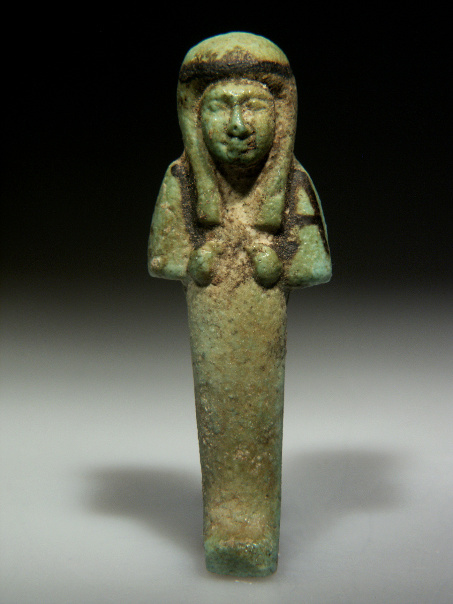 Description:
This is a small, finely modelled shabti. The body is mummiform with the hands protruding. The face is rather round and well modelled, with eyes and brows, nose and lips all indicated. The person depicted is wearing a tripartite wig. Details have been added using black pigment: the implements in both hands, the seed basket on the back, and a head band tied in a knot at the back of the head.

There is no indication about the person for whom the shabti was made. However, it is likely that this shabti once belonged to a person called Nestahy. It is very identical in style, colour and size to inscribed shabtis for this person, and several shabtis for Nestahy were in the collection from which this statuette came.

The position of the hands, the rather flat back, the proportions of the body and the light green colour all point to the 22nd or 23rd Egyptian dynasty as the period in which this shabti was made.

Parallels:
The shabtis for Nestahy have not yet been published; see however www.shabticollections.com about shabtis for this person (SC/82). For the type see Hans D. Schneider, Shabtis - An Introduction to the History of Ancient Egyptian Funerary Statuettes. With a Catalogue of the Collection of Shabtis in the National Museum of Leiden. (3 volumes, Leiden, 1977), type 4.3.1; Hermann Schlögl - Andreas Brodbeck, Ägyptische Totenfiguren aus öffentlichen und privaten Sammlungen der Schweiz (Orbis Biblicus et Orientalis, Series Archeologica, 7) (Göttingen, Vandenhoeck & Ruprecht; Freiburg Schweiz, Universitätsverlag, 1990), p. 232, no. 157.

Condition:
Intact, with some light encrustation and some loss of glaze. In excellent condition overall.