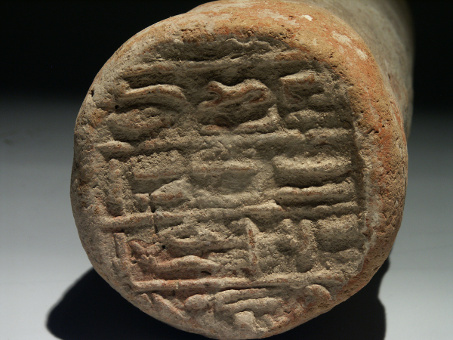 Description:
This is a long, tapering funerary cone, made of clay. The circular short end contains four registers of hieroglyphs, reading: "The overseer of the storehouse (or workhouse) of Amun, Meh; his sister (or wife), the songstress of Amun, Mutemwia".

Meh was a rather common name; it is a nickname, short for Amunemheb ("Amun is in the festival"). Meh was overseer of what was called in Egyptian the Shena of the god Amun, which could both mean storehouse and workhouse, depending on the context. The name of the woman, equally common, means "(The goddess) Mut is in the barque"; she may have been Meh’s sister or wife; the word used here (snt) literally means sister, but in the period from which his cone dates it was also used for someone’s wife.

The cones for Meh and Mutemwia were included in the standard work on cones by De Garis Davies and Macadam as number 440. See also the data of The World of Funerary Cones, (last on page). The location of the tomb of Meh is currently unknown.

Dating:
New Kingdom – 26th Dynasty, ca. 1550 to 525 B.C.; since both names mentioned are rather common it is difficult to date the cone more precisely. However, the database of the British Museum dates another cone for the same persons to the New Kingdom.

Condition:
Intact, which is relatively rare; of most cones only the inscribed part has survived, since the "tail", which was originally inserted into the wall, was later broken off; some of the hieroglyphs slightly worn but still perfectly readable.