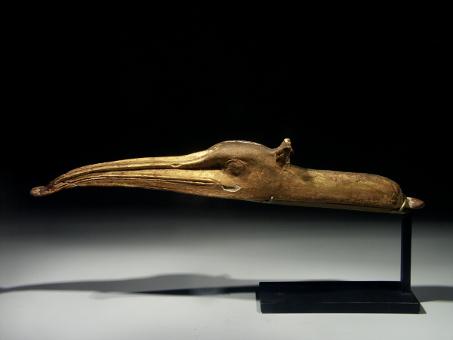 Description:
This wooden head with its long beak is that of an ibis, an animal considered sacred in ancient Egypt and related to Thoth, the god of writing and wisdom. The beak has incised details and the face has strong, almost piercing eyes. In some of the more wealthy offerings, like this ibis head, the whole was covered in gold leaf, because the Egyptians believed that the body of the gods was made of gold and because of the relations they saw between the head and the sun.

The head once crowned a mummy bundle containing a mummified ibis. Usually such heads were attached with the head turned backwards, the beak resting on the back of the animal, as if the bird was sleeping. It was attached to the bundle by means of threads; for this purpose the ends are looped for attachment. Some traces of linen wrappings from the mummy are preserved on the bottom.

Background information:
The majority of the mummified animal remains from ancient Egypt are testimony to the religious phenomenon of sacred animal cults, the popularity of which increased during the seventh century B.C. and which remained active until the edict of Theodosius in AD 379. During this period, millions of birds, in particular ibises and birds of prey, were captured or bred in captivity for the sole purpose of being mummified. These mummies were made available as votive offerings to pilgrims who visited sanctuaries dedicated to falcon deities, such as Horus, and to Thoth, the ibis god. Priests from these cult centers regularly deposited the mummies in catacombs or unused tombs.

Already Herodotus (Histories II, 67) wrote that, like dead cat were brought to Bubastis to be embalmed and buried, ibises were taken to Hermopolis, the major cult center of Thoth. The necropolis that was associated with this city can be found nearby, at Tuna el-Gebel. The custom of burying mummified ibises in the vast subterranean network of galleries here lasted almost 700 years. The number of ibises deposited is not known exactly but well surpasses one million. Moreover, not only Hermopolis had an animal necropolis. Many others have been uncovered throughout Egypt. The major one is located in North Saqqara, which - apart from galleries for ibises - had catacombs for the Apis bulls, for baboons, for ibises, for birds of prey, for dogs and for cats.

Condition:
Intact with much of the gilding remaining, some expected losses to the gesso and gold leaf in a few small areas only, as shown. Otherwise in good condition overall. Comes with a custom mount.