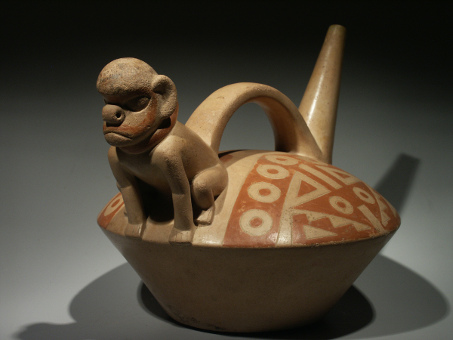 Description:
A marvellous and early polychrome terracotta vessel with a bridge spout, decorated with a finely sculpted crouching monkey on the front upper rim. A (still working!) whistle has been incorporated into the rear of the collar.

Painted cream ground with incised twin opposing decorative elements, highlighted in orange-brown. On the face of it this vessel belongs to the group of geometrically decorated pottery, displaying the so-called step motif (in which the hypotenuse of a triangle consists of steps, probably a symbol for the mountain and/or the temple), triangles and small circles.

But at the same time we also see a completely different motif, belonging to the zoomorphic representations: from this point of view we see the symbolic representation of the head of a catfish. This animal, a freshwater fish which has a wide and flat head with the eyes on top, is frequently portrayed on Peruvian pottery. Quite often the head alone, seen from above, is depicted and usually this is done by composing it of geometric designs such as the step motif. Two small circles represent the eyes.

Catfish, living on the muddy bottom of water streams where they cannot easily be seen, were associated with the world of the dead, which was considered as an inverted, nocturnal, underground, or underwater realm (see Hélène Bernier, 2009; see below).

The ancient authenticity of the vessel was tested by thermoluminescence; a copy of the TL test report accompanies the object.