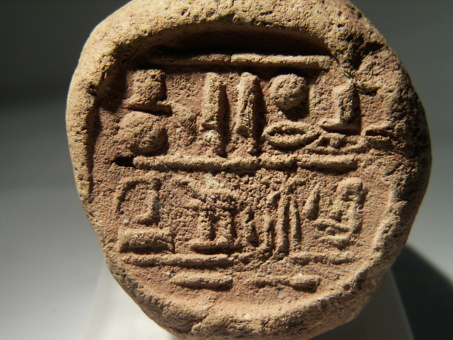 Description:
This is a long, tapering funerary cone, made of clay. The circular short end contains three registers of hieroglyphs, separated by horizontal lines, reading: "The revered one before Osiris, the chief wab-priest Sebekmose, justified". His name means "(The crocodile god) Sebek is born".

The cones for Sebekmose were included in the standard work on cones by De Garis Davies and Macadam as number 501. See also The World of Funerary Cones (first on page).

Generally the tomb is dated to the Ramesside Period, but The World of Funerary Cones gives a slightly earlier date: the period of Tutankhamun - Horemheb.

Condition:
Intact, which is relatively rare; of most cones only the inscribed part has survived, since the "tail", which was originally inserted into the wall, was later broken off; hieroglyphs in deep relief so clearly readable.