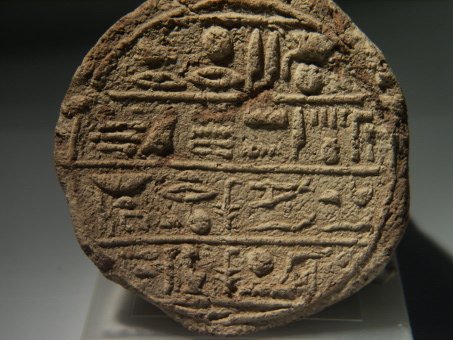 Description:
This is the inscribed end of a funerary cone, made of clay, containing four registers of hieroglyphs, separated by horizontal lines, reading: "The revered one before Osiris, the fourth prophet of Amun Montuemhat, justified; his beloved wife, the king's acquaintance, the mistress of the house Nesykhonsu, justified".

Many cones for this owner were found at the site of his tomb at Asasif (TT 34) as well as in other locations throughout the Theban necropolis. From his titles - mentioned in other sources, especially on his other funerary cones - it becomes obvious that he was a much more important man than is suggested by the title on the present cone: he was also overseer of Upper Egypt, hereditary noble, mayor (of the city), seal bearer of the King of Lower Egypt, sole companion, scribe of the temple of Amun, and vice overseer of the prophets in the temples.

Condition:
Fragment as shown: a part of the "tail", which was originally inserted into the wall, was later broken off; minor wear to some of the hieroglyphs but all the signs are perfectly readable and are visible quite clearly in deep relief.