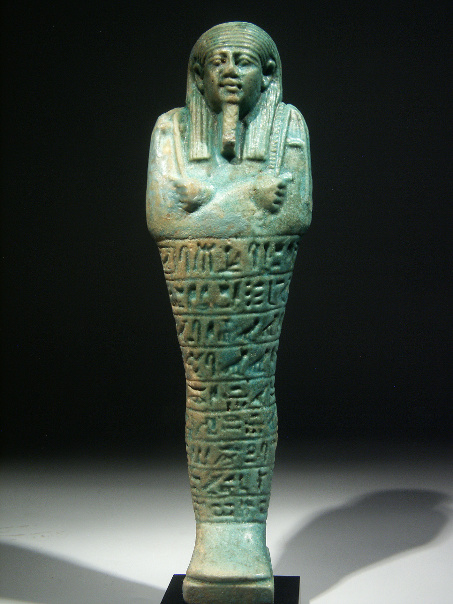 Description:
This is a sizeable green glazed shabti for Ipethemetes with pleasing facial details. The owner is depicted mummiform with only the head and arms protruding from the shroud. Ipethemetes has a plaited false beard and is wearing a striated tripartite wig, with two thick tresses in front of the shoulders, leaving the ears visible. The arms are crossed on the chest, the proper right arm over the left one, and the hands are holding the usual agricultural implements, a pick and a hoe, executed in relief. A seed bag is showing on the back, slung over the proper left shoulder. The shabti has a back pillar and plinth.

The shabti has nine horizontal lines of impressed hieroglyphs, containing spell 6 from the Book of the Dead, the so-called shabti-spell. From the text it becomes clear that the mother of Ipethemetes was called Hathoremakhet (meaning "(the goddess) Hathor is in the horizon").

The name Ipethemetes can be translated as "(The goddess) Ipet is her majesty", although occasionally other translations have been proposed, such as "Her Majesty, Ipet" or "The Ipet of her Majesty".

At the same time the name has a relation to the ancient Egyptian calendar. Several ancient Egyptian lists of the names of the calendar months (tomb of Senenmut and Karnak water clepsydra, both 18th dynasty, and the Ramesseum, 19th dynasty) show that the eleventh month of the Egyptian calendar, also known as the third months of the summer season (III Shemu) was linked to, or called, Ipethemet(es); this later became the month Epiphi. During this month a festival of the hippopotamus goddess Ipet took place. The goddess is depicted for instance on a clepsydra in the Museo Barracco, Rome, inv. MB 27.

Condition: Intact, some encrustation and some surface discolouration, as shown; mounted on a black stand.