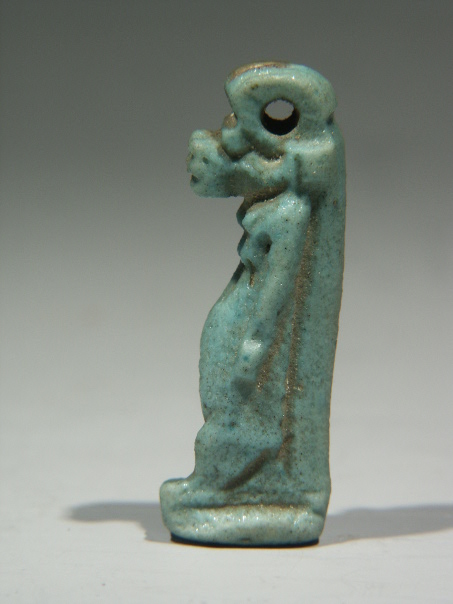 Description:
An amulet made of blue-green faience. Depicted is the goddess Taweret (Thoeris), a female hippopotamus who was considered to be a protectress of women in childbirth. She is shown in one of her traditional positions, striding with her left (hind) leg forward and holding her arms to the sides of her pregnant belly. She has pendulous breasts. A suspension loop on top of her head. On an integral base.

Whereas the male hippopotamus was the embodiment of evil, the female was benevolent, in spite of her fearsome teeth and the crocodile's tail shown on some amulets. It is not known when Taweret became associated with childbirth; however, in the upright posture she assumes, her pendulous breasts and swollen stomach resemble those of a pregnant woman.

Another goddess in the shape of a hippopotamus was Ipet, who provided heat and light for the dead; the two goddesses are so similar that there is always a possibility that she is the deity actually represented; the same applies to this amulet (cf. Andrews 1994, p. 40).

Condition:
Intact, with minor encrustation and surface wear as shown.