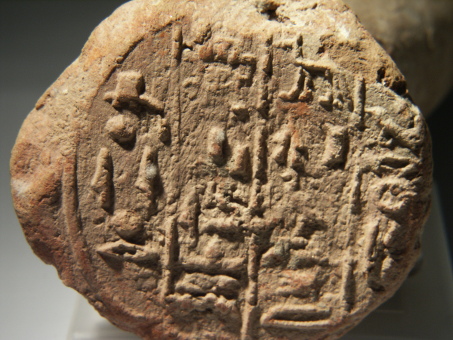 Description:
This is a long, tapering funerary cone, made of clay. The circular short end contains four columns of hieroglyphs, separated by vertical lines, reading: "The revered one before Osiris, the hereditary noble Amenhotep, born of the sab Hapu of Kem-wer justified".

Amenhotep was an important person, whose name lived on in ancient Egypt for more than a thousand years. He was born in Athribis in the Delta during the reign of Thothmes III, as the son of a man called Hapu and a woman called Itu. He was also affectionately called Huy. Amenhotep died when king Amenhotep III had already been on the throne for more than 30 years, so he had a long career in which he gained a great reputation, leading to his eventual deification. Most of what we know about him comes from texts on some of his statues.

After a career as a king's scribe in the Delta he was called to court at Thebes by king Amenhotep III. There he reached the pinnacle of his career. He was appointed as steward to princess-queen Sitamen, and became military commander, overseer of all the works (including the work on the mortuary temple of Amenhotep III; as such he was the creator of the so-called colossi of Memnon), and also private secretary to the king. In addition he held important posts in the temple and, through statues of himself which he was allowed to place in some temples, he also became an intermediary to the gods for others. Later he was accorded divine honours himself, first venerated as a local saint in Thebes but soon as a major god. He was called upon as "perfect physician", so considered to have healing powers, and later became a god of healing, taken up into the Egyptian pantheon.

Pharaoh Amenhotep III gave permission to build a funerary temple for Amenhotep son of Hapu, next to his own funerary temple, an honor which is very rare. Although parts of his sarcophagus have been found, the exact location of his tomb is unknown; it has been suggested that it is TT396, since cones for Amenhotep were allegedly found there, but the tomb itself does not have any texts with his name and titles.

The cones of this type for Amenhotep, son of Hapu were included in the standard work on cones by De Garis Davies and Macadam as number 40. See also The World of Funerary Cones (last on page). Other types of funerary cones for the same person are also known.

Size:
Length circa 22.5 cm, diamater of inscribed side circa 8 cm.

Condition:
Intact, which is relatively rare; of most cones only the inscribed part has survived, since the "tail", which was originally inserted into the wall, was later broken off; minor losses to the top and side that do not interfere with the crisp impression; hieroglyphs in deep relief so clearly readable.