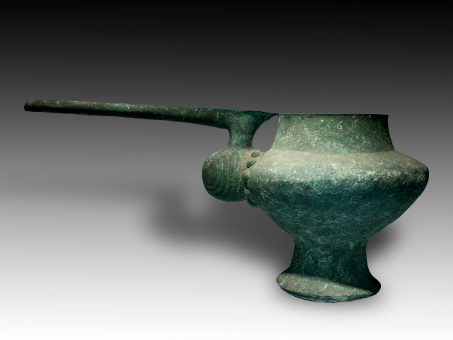 Description:
This is a sensational and very large libation vessel. Is was made of thin sheets of bronze, giving it a thin walled body. There is a very long pinched or U-shaped channelled spout, the base of which was decorated with raised lines and surrounded by eleven pellets.

As is more often the case with objects from the Amlash region, there is an abstract, almost modern feel to it. Scholars have compared such objects to art works created by artists in the twentieth century (Ghirshman 1962, p. 60), in particular Picasso (Gabus 1965, p. 3; idem 1967, pl. IV).

In this case, when seen in profile, the vessel resembles a graceful abstract bird, with the spout representing a long beak and curving neck, and the vessel itself being the body of the bird.

Vessels with such a long spout were probably used for ritually pouring liquids in religious ceremonies, in particular in burial rites (Loukonine 1996, nos. 2, 4; especially found in burial sites: Vanden Berghe 1959, p. 123), although not much about the rituals is known. Many of them were made of terracotta, and in those cases the fragility of the spout and the thin walls made them less suitable for practical purposes in daily life. The long spout made it possible to direct the jet of the liquid.

Provenance:
Collection of the archaeologist Jay Gluck (1927-2000) and his wife Sumi Hiramoto Gluck, acquired in the 1960s. The Gluck collection, consisting of several thousand objects, was one of the largest private collections of Persian art in the world. It contained some of the oldest Persian antiquities in existence. Many pieces from the collection have been exhibited for a long time in Persia House, Kobe, Japan and later in the Nara Orient Kan Museum, Japan. Parts of the collection were later moved to the Miho Museum, Japan, and other museums.

Jay Gluck was an American archaeologist and specialist for the history of Persian art. He graduated from the University of California, Berkeley in 1949 in Archaeology and Middle Eastern Studies. In 1966 he became director of the Asia Institute of the Pahlavi University in Iran. He is also well known for republishing the work of Arthur Upham Pope, A Survey of Persian Art.

Condition:
A few very small holes in the wall of the vessel; some roughness to a small part of the spout; else intact with a fine, even green patina.