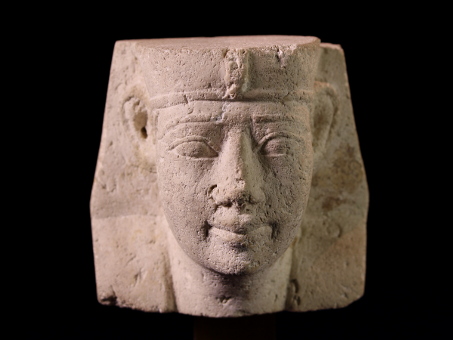 Description:
This limestone representation of the head of a pharaoh is what is usually called a sculptor's model, a piece that may have served as a model for an ancient Egyptian artist (although some scholars believe that they were trial pieces or votive or cult objects).

The king is wearing the nemes head cloth. The facial features are finely sculpted, with large, almond shaped eyes, eyebrows, a fleshy nose and a small, smiling mouth which is typical for the fourth to third century B.C.

The back of the object is flat and without any grid marks.