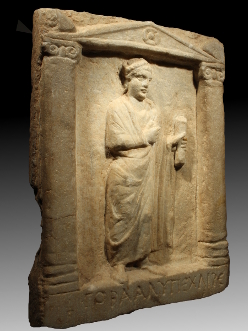 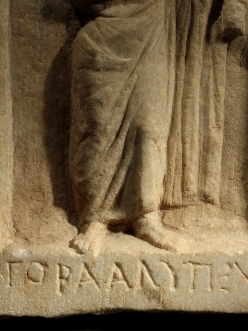 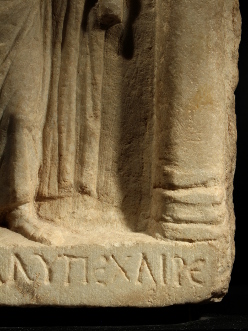 Description:
This is a monument from the Roman Eastern Empire, probably Syria. Depicted in carved relief is a standing male figure, wearing a toga and holding a scroll in his left hand. He is placed within a border consisting of architectural elements: columns with a Ionic style capital on either side, and a pediment above, which is decorated with a rosette. There is a single line of inscription in Greek beneath, reading ΓΟΡΑ ΑΛΥΠΕ ΧΑΙΡΕ.

The last word of the inscription means "farewell", and indicates that this is a funerary monument. The word is frequently put into the mouth of the dying (see Liddell - Scott, A Greek-English Lexicon, with many examples), but can also be used by those who stay behind on earth to bid a beloved departed farewell.

Gora is the name of the person depicted. It has been suggested that this may be a familiar shortening of a longer name such as Aristagora / Aristogora, or perhaps an equivalent of the name Goras, which is attested at Dura-Europos: one of the magistrates of the boulè (the civic council of the Dura-Europos) was called Goras (see Nathanael John Andrade, Syrian Identity in the Greco-Roman World (Greek Culture in the Roman World), (Cambridge University Press, 2013), p. 320; idem, "Imitation Greeks": Being Syrian in the Greco-Roman World (175 BCE-275 CE), dissertation, University of Michigan, 2009, p. 368; Lucinda Dirven, The Palmyrenes of Dura-Europos. A Study of Religious Interaction in Roman Syria (Religions in the Graeco-Roman World, Volume 138) (Leiden, Boston, Köln, Brill, 1999), p. 299). On the other hand there are also sources for the name Gora, see for instance Nigel Pollard, Soldiers, Cities, and Civilians in Roman Syria (University of Michigan Press, 2000), p. 125, 137 for a signifer or standard-bearer with this name.

The word in the middle means "without pain", and has been interpreted in two ways. It could be an indication that Gora has suffered from pains during his lifetime and that death has brought deliverance. If this is indeed what was intended, the text is rather moving: "Gora, who is without pain now, farewell". But more commonly accepted is the translation "causing no pain", indicating that the deceased has never done any harm in his lifetime.

The combination "without pain, farewell" has almost become a formula, and is most commonly found on monuments from Syria. See for example a tomb marker for a man called Eumorphos, now in the Istanbul Archeological Museum, and a stele in the same museum for a woman called Fucinia. For other examples with the translation "free from pain" see the text for a man called Ariston (Report of the Department of Antiquities, Cyprus (2001), p. 292), and another example for a woman called Levitha is in the Museum of Art and Archaeology of the University of Missouri (see Museum Magazine No. 63, Fall 2013, p. 15).

It was suggested to us by a Greek archaeologist that the marble for this relief was quarried near Athens, based on the slightly blue colour of the veins. This marble was highly prized in the ancient world, second only to the marble from Paros.

Condition:
The object is in fine condition; minor surface wear throughout with pitting and scratches; chipping and other damage, largely to the edges of the panel, including a large chipped area on the left edge with stress cracking and a deeper hole within, and a more recent chip on the right edge of the stele; some light abrasions and chips to the figure; a glue repair is visible on both forefingers; the front has been cleaned but there is a warm beige patina with encrustation; the reverse is covered with a darker layer of encrustation and deposits; some pencil markings; drilled on the underside in two places for insertion of the stand.