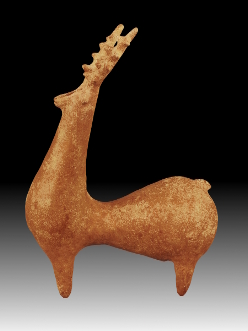 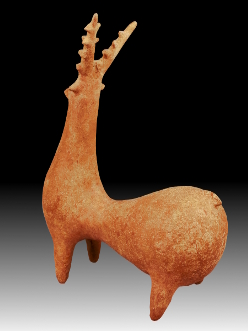 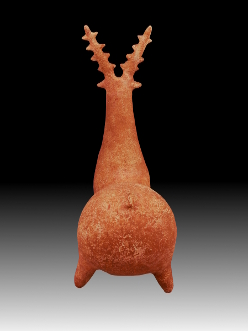 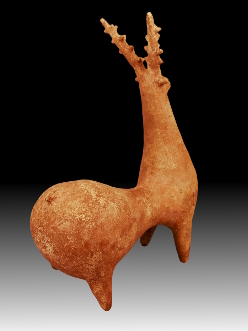 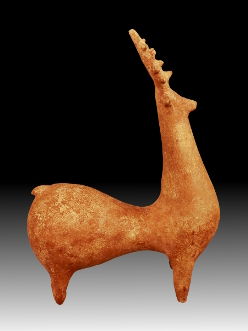 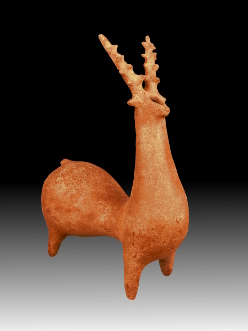 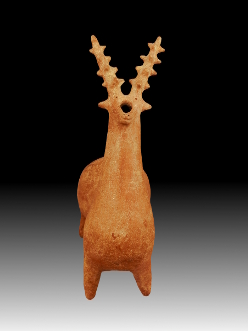 Description:
The hollow vessel has an elegant slender round body and large, almost spherical hindquarters. The chest and neck form a distinct vertical unit which swells and then diminishes as it rises to the head. The head is formed by a short spout in the form of the muzzle, with indicated eyes, nostrils and pointed ears. From the top of the head rise a pair of well-defined straight antlers that fork at the top and have small nub-like tines on the front surface.

The vessel stands on four tapering legs, which are round and extend smoothly from the fore- and hindquarters. The short tail and genitalia have been indicated.

The antlered stag features prominently in the art of northern Iran. However, the significance of the stag in Iranian culture is unknown, for no written documents survive from this period. By analogy with other ancient cultures it has been assumed that the animal embodies concepts of virility and agility. In neighboring Anatolia in the second millennium BC, for instance, the stag was intimately related to the worship of major deities.

Provenance:
Collection of Emanuel Gran (died 1969); thereafter US private collection. Gran was an architect for Hilton Hotels and a well known collector of antiquities. He lived in China for over 20 years before bringing his collection back to the USA in 1941. He started selling off his collection well before his death, which was in 1969. This stag vessel was sold to a dealer in Hudson, New York, who sold it to a US private collector in the 1970s.

Condition:
Repaired crack across center of the back, stretching from top of the underside on one side and wrapping around the back. Left legs broken off, and reglued. Front left leg with some damage (ca. 1 cm), filled during restoration. Hairline crack from left ear to left eye; some flaking around the left eye. Outer layer on the back of the right antler down to the second nodule flaked off; tip of antler broken off. Little chipped area on inner antler near scalp. All professionally restored, all original including the legs that had been broken off, except the fill for the chipping and the tip of the antler.