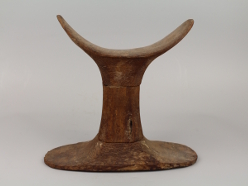 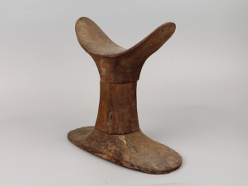 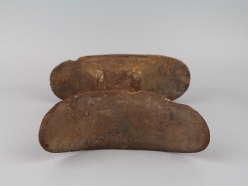 Description:
A well preserved headrest with an elegant shape, composed of three parts: a wide, sloping base with a flat foot, an upright, slightly tapering stand, and a curved piece on which the head could rest.

This is the basic shape that Egyptian headrests maintained throughout the long period in which they were in use, from the earliest part of the historic period until late in Graeco-Roman times.

Most headrests were made of wood or stone, although other materials could be used as well. They were primarily objects of daily life, as seen in models and depictions of houses, for example in several tombs in El Amarna. As objects of everyday use, they could be decorated with images of protective deities, warding off evil during the dark night, or inscribed wish wishes for a good sleep.

Since the ancient Egyptian believed that life would continue after death, although in a different form, they provided the dead with all kinds of things they might need in the hereafter. The headrest was among those objects, because the dead was believed to be sleeping. The object was considered an essential part of the burial equipment, and was even included in the funerary offering lists.

Real headrests would be placed in sarcophagi, usually under or near the mummy mask, but sometimes also on top of the sarcophagus or near it on the floor of the tomb. In addition to this, headrests were often depicted in the object frieze of sarcophagi. The Middle Kingdom Coffin Texts contained funerary spells for the headrest, and so did the Book of the Dead that came into use in the New Kingdom. These texts make clear that lifting the head of the deceased was associated with waking up and thus with resurrection; at the same time the spell was supposed to prevent the loss of the head in the hereafter.

In later periods, miniature headrests were sometimes placed between the mummy wrappings as amulets, and some of these were even inscribed with a short version of the spell from the Book of the Dead.

As remarked by specialists in the Fitzwilliam Museum, Cambridge, UK, dating Egyptian headrests remains problematic, because different shapes of headrests were used at the same time. Egyptologists usually work out a chronological typology for object categories, which allows them to allocate relative dates for different forms of the same object type. However, evidence from Egypt shows that several forms of headrests were in existence simultaneously.

Still, the headrest offered here is believed to be from the New Kingdom, based on stylistic grounds and its manufacturing technique. It closely resembles several headrests in the Fitzwilliam Museum that are considered to be from that period (for example inv. nos. E.GA.2668.1943 and E.W. 69), although it is also highly similar in shape to a headrest in the same museum from the First Intermediate Period (inv. no. E.86.1921).

Background information:
Headrests have been used in many countries and cultures for thousands of years. In the Neolithicum (circa 6000 - 3000 B.C.) they were already used in Switzerland. All over Africa headrests have been, and still are, used; the same applies to the Far East and Oceania. For an overview see the catalogue of the exposition Supports de Rêves, held in Paris in 1989.

In Egypt headrests of a very simple form have been found in predynastic tombs, consisting of no more than a simple elevation in the floor, a pile of straw, a folded animal hide or a block of stone or clay. “Real” headrests with a central column have been found in neolithic tombs, and early in the historic period headrests became a common object in the funerary furniture.

There are several reasons for using a headrest, for instance the wish to protect the sometimes elaborate hairdo, which would be ruined by direct contact with the bed, or to avoid contact of the head with the ground. But the most important reason is assuring a more comfortable position during sleep. This appears to be guaranteed only if the sleeper is lying on his side; sleeping on the back with the head on a headrest in uncomfortable and can cause considerable pain, as remarked by the archaeologist Flinders Petrie, who experimented with sleeping on headrests. The idea is that the height of a headrest should equal the distance from the side of the head to the tip of the shoulder, to keep the neck aligned.

When used in this way, a headrest offers more comfort than a pillow, especially in countries with a warm climate, because it allows the air under the head and the neck to circulate.

The object was, and in many cultures still is, considered important for waking up from sleep, and following naturally from that, for waking up after death; funerary rituals all over the world still make use of a headrest to procure either eternal rest or resurrection of the deceased. The motifs used in decorating a headrest can also contribute to this. Many cultures know of a relation between the headrest and the sun.

Headrests can carry inscriptions, wishing the user a good sleep or pleasant dreams. They can also evoke dreams, play a part in divination practices or mediate between the living and the ancestors. They can also keep away bad dreams and evil in general.

Condition:
A few chips and age-related cracks; some wear; overall in a very good condition.