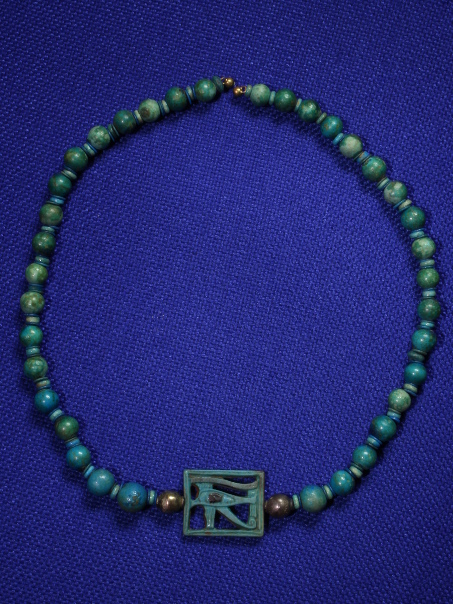 Description:
A wonderful glazed necklace consisting of 36 ball beads made of Egyptian turquoise faience, interspersed with sets of 3 small lentoid faience beads; in the centre, surrounded by two silver beads, is a beautifully designed rectangular wedjat eye pendant, which is openwork, double-sided and two-toned.

The word wedjat or udjat meant "the sound one", referring to the eye of the god Horus after it had been plucked out during one of his battles with Seth, and then healed by Thoth. This Horus was the elder (Greek Haroëris), the celestial falcon and great creator god whose right eye was the sun and left eye the moon. It is generally supposed that the wedjat was the moon eye, which was "injured" as it waned and "restored" as it waxed each month, but the term might just as well apply to the sun eye, the "sound" one as opposed to the "injured" one. When Osiris rose to pre-eminence as the god of the dead, the wedjat became identified with the eye of his son Horus. According to the Osiris myth, Horus offered the healed eye to his dead father and so powerful a charm was it that it restored him to life (Andrews, p. 43-44).

At its most basic the wedjat is a human eye with brow above and markings below; the latter take the form of a drop shape at the front and an uncurling spiral at the back, said to imitate the markings on the head of the lanner falcon, but also mentioned as tears connected with the injuring of the eye.

Provenance:
Collection of Dr. Goddard Du Bois (1869 – 1925) and Josephine Cook Du Bois (1864 – 1961), New York, acquired in Egypt between 1900 and 1906. The couple took frequent excursions throughout Egypt, and acquired a marvellous collection of antiquities, one of the largest privately owned collections to be exhibited in major museums in the USA.

Condition:
Intact with no repairs or cracks; some moderate discoloration; wedjat eye in excellent condition with only a tiny area of wear on one side.