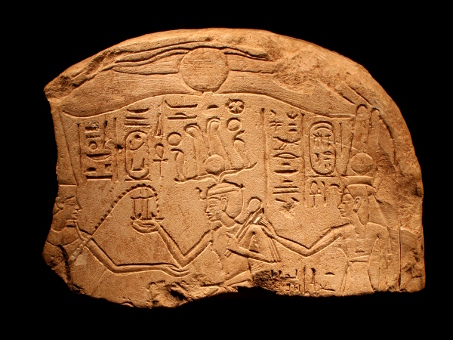 Description:
This is a very rare relief fragment, showing pharaoh Amenhotep I and his mother Iahmes-Nefertary in front of the god Amun. The king receives a so-called Hebsed from the god, suspended from a palm branch, a symbol for numerous years and jubilees on the throne.

This is a rare depiction of the king and queen showing them during their lifetime. After their death, both royals were deified and became patrons of Deir el-Medina, the village were the artisans lived who worked on the tombs in the Valley of the Kings. The vast majority of depictions of the king stems from his posthumous funerary cult, showing him being worshiped as a deity himself, and receiving offerings.

Based on the crown worn by the queen, which is not known to appear in art before the 19th dynasty, this relief might date to that period, when the cult of the deified king and queen was at its height. Alternatively this could be an early attestation of the crown, given the fact that the royal couple is shown not as gods but as living beings.