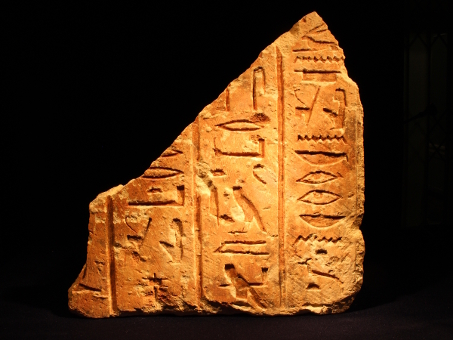 Description:
Showing three partial columns of well carved hieroglyphic inscription, and traces of a fourth column on the left. The surviving parts of the columns are too short to make a full translation possible or even to be sure about some of the words:

Column 1 (left): I have given air / breath … (or: To give to me air/breath)
Column 2 (middle): … one is strong there in …
Column 3 (right): I have opened both your eyes for you … (followed by a word which could mean eternity, own, bodily, physical, or, alternatively, might be the independent pronoun “he”).

For the uncertainly in column 3 see Penelope Wilson, A Lexicographical Study of the Ptolemaic Texts in the Temple of Edfu (Liverpool, 1991), p. 179. She explains that the translation of the phrase irt= nt Dt= is uncertain; she refers to D. Meeks who took it as “son propre oeil” (An.Lex. 77.0381; 79.0284) and who collected examples from the date of Pepi I; she then gives various interpretations: own eye, eye of eternity, bodily eye, physical eye.

In any case, the text comes from a funerary context; the opening of the eyes is also mentioned in the famous ritual for opening the mouth of the deceased.

The fragment possibly comes from the tomb of a man called Wahibrenebahet: it comes from the same collection and is stylistically very close to other fragments that were sold by Bonhams (London) en Arte Primitivo (New York), which all seemed related and on several of which the name Wahibrenebahet is present. Bonhams has suggested that they might possibly be from Thebes, and that Wahibrenebahet probably was a high ranking official connected with the importation of precious metals.

Provenance:
With Arte Primitivo, New York, May 2015, lot 132; before that collection of Ashraf Eldarir, U.S.A., inherited from his grandfather, who was a close friend of the late prince Omar Tosson, member of the Egyptian royal family and a passionate archaeologist. The collection was formed during the 1930s-1940s, and consisted mostly of gifts from prince Omar Tosson. The collection was moved to the United States in 1948 and remained in the family’s possession until they decided to sell. Comes with a signed statement from Mr. Eldarir to Howard Rose (Arte Primitivo) concerning the provenance information.