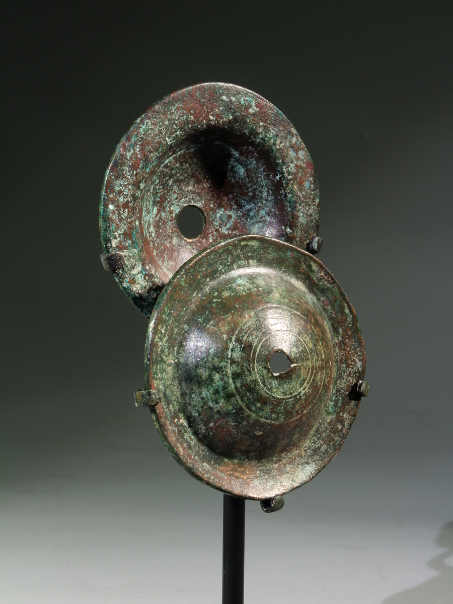 Description:
A set of two cymbals, each consisting of a circular, flat plate of bronze with a domed centre, which was pierced for threading with a strap handle. They were found in a crevice in the ruins near Jerusalem.

Musical instruments like this were used to mark time or rhythm, and as musical accompaniment by musicians and priests. In the Old Testament they are usually mentioned in connection with other instruments like trumpets, horns, harps, lyres, and tambourines. They were prominent in the music at religious ceremonies and psalm-singing, and above all at special occasions like moving the ark to Jerusalem (I Chronicles 15), the beginning of the temple restoration (Ezra 3:10) or the dedication of the wall (Nehemiah 12:27). Especially the Levites used them, as they were set apart as cymbalists (I Chronicles 16:42).

Cymbals in Biblical times were smaller and thicker than the ones used today. There were two basic types of cymbals; during excavations in the Palestine area both smaller (ranging from 3 to 6 cm) and larger (circa 8 to 12 cm) examples have been uncovered (Braun 2002, p. 109). The Hebrew text of the Old Testament also uses two different words, tseltselim and metsiltayim, both derived from the same Hebrew root tsalal = to quiver, cause vibration, and from there to tinkle. The smaller ones, possibly functioning as finger cymbals, produced a high-pitched tinkle.

For an overview of this kind of percussion instrument see Yelena Kolyada, A Compendium of Musical Instruments and Instrumental Terminology in the Bible (London and New York, Routledge, 2014), p. 122-127. See also Ivor H. Jones, “Musical Instruments in the Bible, Part I”, Technical Papers for the Bible Translator, volume 37, no. 1 (January 1986), p. 106-109 and 110-111, and more in general Joachim Braun, Music in Ancient Israel/Palestine (Grand Rapids, Michigan/Cambridge, U.K., William B. Eerdsman Publishing Company, 2002).

Paul Ilton, in his publication of the cymbals offered here, narrates how they were found, and remarks that this was a significant find of objects that are at least 3000 years old. He adds that these were “possibly used in the time of David, when the great king sang his songs in praise of God”.

Provenance:
Private collection of Dr. Paul Ilton (Germany 1904 - U.S.A. 1958). Dr. Ilton lived in Palestine from 1933 to 1947, when he moved to the United States. He was internationally known as an archaeologist, lecturer, teacher, film consultant and author. As a free-lance archaeologist, he worked with Sir William M. Flinders Petrie. He devoted his life to digging in the Bible-rich ruins of the Middle East, where he gathered a collection of objects from Biblical times. He recorded his findings in a book The Bible Was My Treasure Map, which was published in 1958 shortly after his death. Most of his extensive collection was sold at auction on 21 November 1959 in the Waldorf-Astoria Hotel on Park Avenue in New York City by auctioneer Hans M.F. Schulman.

Condition:
Intact and in very fine condition overall. They come with a custom made mount.