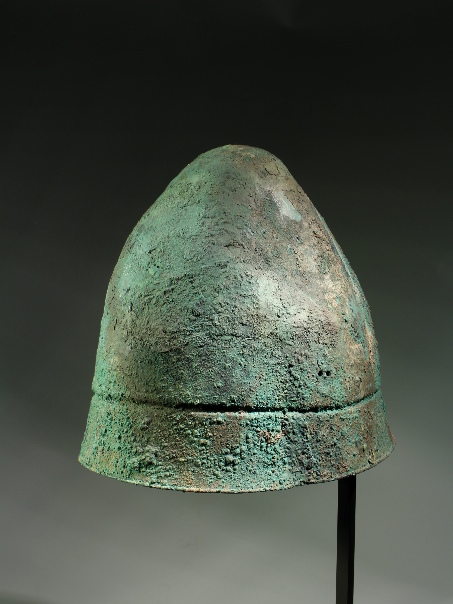 Description:
A conical helmet of hammered bronze, which has a single groove in its lower part, encircling the whole helmet. This creates a sort of broad brim, rounded at the bottom edges. It has been suggested that the groove imitates the leather thong that was usually sewn into its felt prototype for adjustment. On both sides of the helmets a few small holes served to attach a chin strap.

This conical type of helmet is referred to as a pilos helmet. It is usually assumed that the shape of the helmet was derived from that of a conical hat, that was common in ancient Greece, and that was made of felt or leather (see however Goldstein, p. 385-386). The Greek word pilos originally indicated wool or hair wrought into felt, used to make a kind of cap or hat. Such a hat was possibly worn under the bronze helmet for comfort or protection. The material was also used as a lining for helmets, see for example Homer (Iliad, Book 10, line 265) about a helmet (of another type) which is lined with felt.

Pilos helmets are often depicted in art: shown on vases and stelae, sculpted in relief, engraved on situlae and mirrors, cast in bronze or struck on coins and moulded in terracotta (for an overview see Goldstein 1968, p. 385 and notes 9-15).

At the end of the 5th century B.C. a widespread adoption of the pilos helmet occurred in Sparta. During the following centuries the helmet soon became a popular infantry helmet.

In earlier stages Corinthian helmets had been in use, which completely enclosed the head and therefore provided much more protection than the later pilos helmet. However, they also restricted vision and hearing, which may have been the reason for the development of the pilos.

Another theory suggests that, since the pilos helmet was cheaper and easier to manufacture than other helmet types because it required less bronze, lower class soldiers choose the pilos instead of the more expensive variants, spending most of their money on a sturdy shield and weapon.

It has also been suggested that the Spartans adopted this type of helmet to show their bravery, stressing that they had nothing to hide, not even fear or passion in their faces.

However, the choice for a less protecting helmet may not always have been ideal. Thucydides (Peloponnesian War, Book 4, chapter 34, section 3) remarks that the Lacedaemonians (name of the city-state Sparta in antiquity) suffered greatly during a conflict because the pilos they were wearing did not keep out the arrows. This may of course relate to the felt cap, but given the date of the event it is more likely that the word was also used to refer to the bronze helmet.

Provenance:
Collection of Axel Guttmann (inventory number AG 408), acquired in Germany in 1991. Axel Guttmann (1944-2001) was born in Austria, but grew up in Berlin. He was a passionate collector of many things, but is especially remembered for his vast collection of ancient arms and armour. In his Berlin home the collection was displayed in a museum-like manner, and scholars and collectors were always given access to the objects. He worked together with restorer Hermann Born, who started the series of publications Sammlung Axel Guttmann (Verlag Sammlung Guttmann bei Philipp von Zabern, Mainz am Rhein), consisting of nine volumes.

Condition:
In a slightly bent shape, most likely as found; a few spots of restoration in the cap, reinforced on the inside with glass fabric; with a beautiful rough, dark to blue green patina and uneven surface.