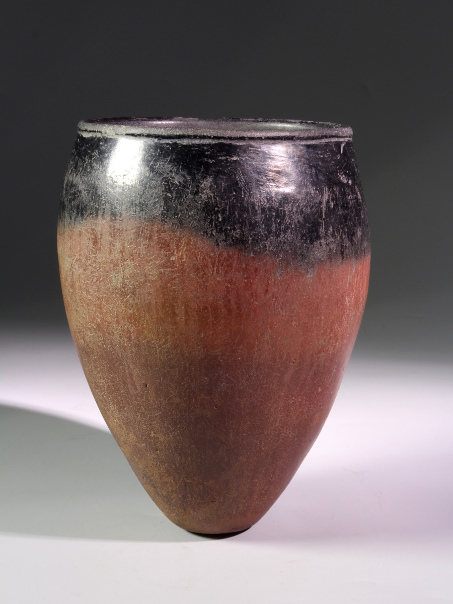 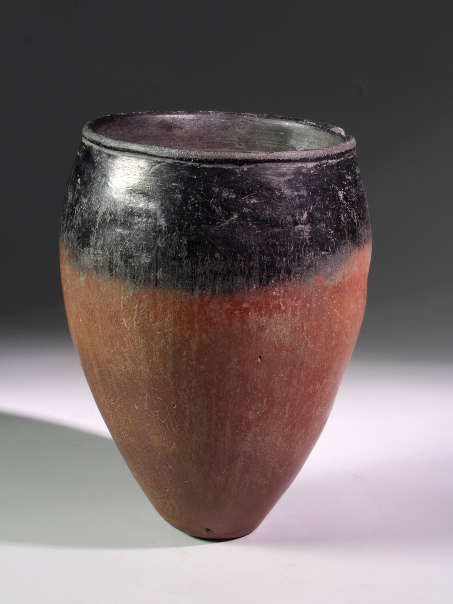 Description:
An example of pre-dynastic pottery, with a moulded rim, smooth sides and ovoid in shape, tapering toward a narrow base. Such vessels are commonly called black-topped red pottery or B-ware (as classified by Egyptologist W.M. Flinders Petrie) because of their distinctive blackened rim.

Usually such vessels were built up using the co-called coil construction (see Arnold et al.); in some cases the coils may have been built on a turntable, making the vessel shape more regular.

Black-topped vessels were made from Nile silts, the alluvial deposits of the Nile valley, rich in silica and iron, which fired to a reddish or brown colour in an oxidising atmosphere. The exterior was coated with a thin red iron-oxide wash that was polished or burnished with a smooth object like a pebble. This was done after the pot had dried but before it was fired, and it resulted in a lustrous surface.

Egyptologists have long been discussing how the black top was achieved. For an overview of theories see Hendrickx et al. More or less generally accepted is the view that, since clay turns black when a pot is fired in a reducing atmosphere (without oxygen) whereas it turns red in an oxidising atmosphere, it is likely that the two colours will appear on different parts of the vessel if the atmosphere is different for these parts. Adding soot would also aid the blackening of the vessel.

Pots like this are well known from the Amratian culture, a prehistoric culture that lasted from approximately 4000 to 3500 BCE. It was named after the archaeological site of el-Amra (located circa 120 km south of Badari in Upper Egypt), the first site where the culture was found without influences of the later Gerzean culture. The period is better attested at Naqada, and as a result it is usually referred to as Naqada I (whereas Naqada II is used for the Gerzean culture).

Black-topped pottery no longer occurs after the beginning of the Naqada III period (about 3300 B.C.), with the exception of very few examples which were apparently intended for ritual use only. The disappearance of black-topped vessels in Egypt can be connected with the appearance of pottery made of marl clay, which comes from the desert and can be fired at a higher temperature (850 – 1050 degrees Celsius) than Nile silt, and therefore is less porous.

Condition:
A flat chip to the rim, as shown; some minor surface wear, scratches and other damage as shown; else intact. A couple of stickers on the inside. Comes with a stand.