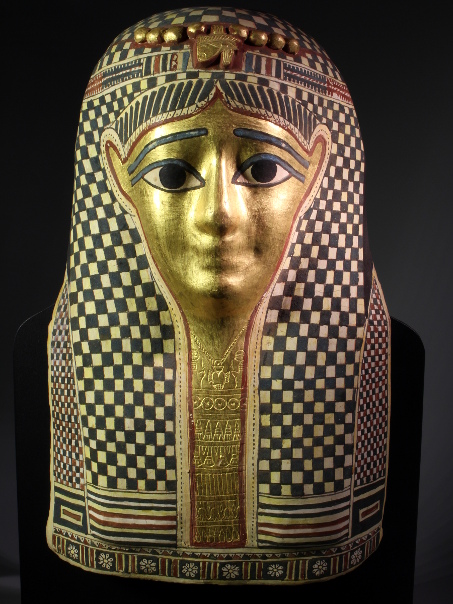 Description:
A mummy mask of the so-called helmet type, which was placed all around the head of the mummy. The mask was made of cartonnage and was partly gilded and partly painted in polychrome.

Especially the parts of the mask that show the human skin (face, neck and ears) were gilded because the deceased hoped to become a god after his death, being equated with Osiris; according to Egyptian beliefs, the flesh of the gods was made of gold, the imperishable element that also contained solar aspects. A gold or gilded mask therefore helped to represent the deceased as a transfigured being, eligible for eternal life.

Parts that represent jewellery are also gilded. On top of the head a gilded amulet in the shape of the Eye of Horus and a string of gilded beads are affixed, all executed three-dimensionally. On the chest a broad collar is visible, also gilded, consisting of a heart amulet, suspended from a chain and guarded by two seated deities, and several rows of beads.

The face is idealised and youthful, with large, wide-open eyes with dark pupils. Other facial features such as the nose and mouth were summarily modelled and not painted. All this is typical for mummy masks of the period.

The face is surrounded by a tripartite wig which leaves the ears exposed and which is decorated with a checked pattern, the two locks of hair on the shoulders terminating in a border of horizontal stripes. A stylised net of green and blue beads is represented on the shoulders. The bottom border of the mask contains further polychrome decoration, consisting of a band of alternating rosettes and stripes.

Background information:
Cartonnage was made with several layers of linen (or, in later periods, sometimes recycled papyrus documents) which were glued together and shaped in a mould or moulded over the mummy, and then coated with a layer of gesso (a mixture of glue and plaster). This resulted in a smooth medium, well suited for painting.

The ancient Egyptians believed that the preservation of the body was essential to the eternal survival; it served as the physical point of return for the ba (often translated, rather incorrectly, as “soul”), the aspect of man that could move freely after death, that would leave the tomb in the shape of a human-headed bird to sit in the sun, or to drink water in the shadow of some trees in the garden, and that would at night return to the body, transferring to the mummy the energy it had acquired during the day. In order to make this possible this, the body of the deceased had to be preserved, as well as protected in the tomb. At the same time, its appearance had to be made such that the ba would recognise the body.

Improvements in the mummification technique, developments in the funerary beliefs and other factors have during the long history of ancient Egypt resulted in a series of changes that affected the appearance of mummies and the shape and decoration of coffins and masks.

Fragmentary pottery masks, dating to the late Predynastic Period, have been found, but there is still some discussion about their function. But by the early Old Kingdom, the linen outer wrappings of mummies were already stiffened with plaster, modelled and painted to imitate facial and anatomical features. Later in the Old Kingdom, these details were modelled in an added layer of plaster. Since the First Intermediate Period the head of the mummy began to be protected with a cartonnage mask placed over the wrappings, representing the deceased. In the early New Kingdom the wrapped heads, their faces painted, were sometimes provided with false hair and false eyes.

Condition:
Some losses, mainly affecting the lower right hand side of the back, as shown; professionally conserved with some restoration; overall in an excellent state of preservation.