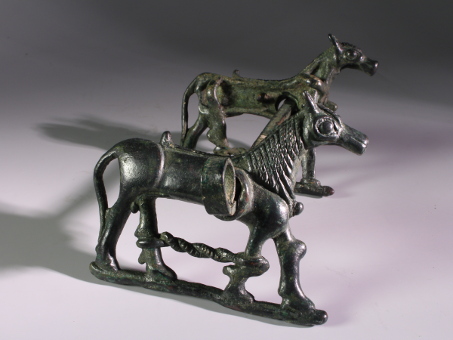 Description:
A horse bit, consisting of a rigid mouthpiece, the ends of which curled in opposite directions, and a pair of cheek pieces, cast in the form of horses, standing on a horizontal ground line. This is the typical form for a Luristan horse bit, although the cheek piece can show a variety of animals. The horses on this example show a broad mane, executed in detail, and prominent ears. Two legs of the animals are connected by a twisted rope. The obverse of the cheek pieces is in relief, whereas the reverse is mainly hollow, a phenomenon seen on most of these pieces.

Figured cheek pieces seem originally to have developed in Iran, and there are more examples surviving from Luristan than from any other area. Horses (and possibly the chariot, although not many of these were found) played an important role in Luristan; as Muscarella (1988, p. 155; 1990) pointed out, the quantity of horse bits found probably indicates an organized cavalry (or chariot) force.

It should be added that there is discussion among some scholars whether horse bits were made for a funerary purpose, to be put under the head of deceased human beings as is sometimes claimed, or for real use in daily life; most scholars prefer the latter option, as many examples show some wear; see Porada (1964, p. 27 note 66) for a possible ceremonial use.

Muscarella (1990) mentions, based on previous studies by Porada and Potratz, that figured cheekpieces first appeared in the 8th century B.C.

Condition:
Intact with a black patina; some encrustation; very minor pitting and other surface wear; minimal damage (a few mm only) to the middle of the horizontal mouthpiece. Comes with a custom made acrylic base.