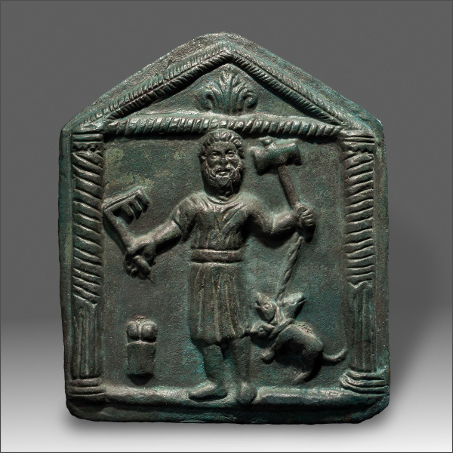 Description:
A votive plaque showing Hades or Pluto, as he was later called. He was the god of the underworld. He is depicted standing in a small building or aedicula with two columns (partly spirally and partly vertically fluted) and a gabled roof with acanthus leaves as its central decoration.

Background information:
Greek mythology informs us about a divine war lasting for ten years, known as the Titanomachy, in which the gods Zeus, Poseidon and Hades were the victorious ones; they subsequently drew lots to divide their rule. Zeus won the broad heaven amid the air and the clouds, Poseidon the grey sea to be his habitation for ever, and Hades won the murky darkness of the underworld. The earth and Olympus remained common to them all (Homer, Iliad XV, 187-193).

In his realm Hades ruled the dead, making sure that none of his subjects ever left to return to the world of the living. He was helped by a multi-headed guard dog called Kerberos, a monster that guarded the gates of the underworld to prevent the dead from leaving. Hesiod (8th-7th century B.C.) mentioned that Kerberos was the offspring of the monsters Echidna and Typhon, and that the animal had fifty heads (Theogony, 310). In later myths the number of heads varied (from one head to one hundred heads), but most commonly the animal was thought to have three heads.

Hades, the god of the dead, was feared as much as death itself. It is known that people sacrificing to the god would avert their faces, and also swearing an oath in his name or simply speaking the word Hades was frightening; instead, euphemisms were often used. One of these was Plouton, a name used since around the 5th century B.C. (based on a root meaning “wealthy”, the idea being that both precious metals and fertile crops would come from under or out of the earth, so from the realm of Hades, who had control over these). The name was later latinised as Pluto.

It is not easy to give backgrounds for the hammer, also because Hades was so infrequently depicted, possibly out of fear. It is known that Hephaestos, the Greek god of blacksmiths, carried a hammer, which for him had a clear purpose, and with which he smashed open the skull of Zeus, allowing the goddess Athena to be born. For Hades the use of a mallet is less obvious. The mallet as an attribute of Pluto is mentioned by the early Christian author Tertullianus (2nd-3rd century C.E.) when he writes - polemically - about the Roman gladiatorial shows: “the midday games of the gods when father Pluto, brother of Jove, hauls off the remains of the gladiators brandishing his hammer” (Ad Nationes 1, 10). However, it has been suggested that there may be a confusion with the Etruscan Charun (one of the Etruscan psychopomps) who, guarding the entry to the underworld, was known to carry a hammer; in Etruscan art the hammer was an essential attribute of Charun, appearing on numerous monuments depicting the god (see Francis A. Sullivan, “Charon, the Ferryman of the Dead”, The Classical Journal 46, no. 1 (October 1950), p. 15; 17 n. 23). But there are various opinions about the function of this hammer: symbolizing the blows of death (Sullivan, p. 16), to open the door to Hades (Emily Jensen Porfiri, Cerveteri: Heart of Etruscan Culture, California State University, 2008), for knocking the bolts of the great door of the underworld into place (Tom Rasmussen, “Etruscan Ritual and Religion”, in Timothy Insoll (ed.), The Oxford Handbook of the Archaeology of Ritual and Religion (Oxford University Press, 2011), p. 716), or as a symbol of the finality of death (ibid., p. 716).

The key is one of Hades’ common attributes; it is a symbol of his control over the underworld and a reminder that the its gates are locked, so that nobody can leave. Pausanias (second century C.E.), in his Description of Greece (5, 20), talks about the votive offerings in the temple of Hera in Elis on the Peloponnesos, mentioning a scene on a chest (according to some, however the text might refer to a table made of ivory and gold) that shows Pluto. He adds a remark about the key of Pluto, explaining that “what is called Hades has been locked up by Pluto, and nobody will return back again therefrom”. On the other hand, the Orphic Hymns (religious poems, dating from late Hellenistic or early Roman times) contain one hymn to Pluto (hymn 17), which connects the keys to giving agricultural wealth. The text contains the following words (in the famous 1792 translation of Thomas Taylor): "Earth's keys to thee, illustrious king belong, its secret gates unlocking, deep and strong. 'Tis thine, abundant annual fruits to bear, for needy mortals are thy constant care."