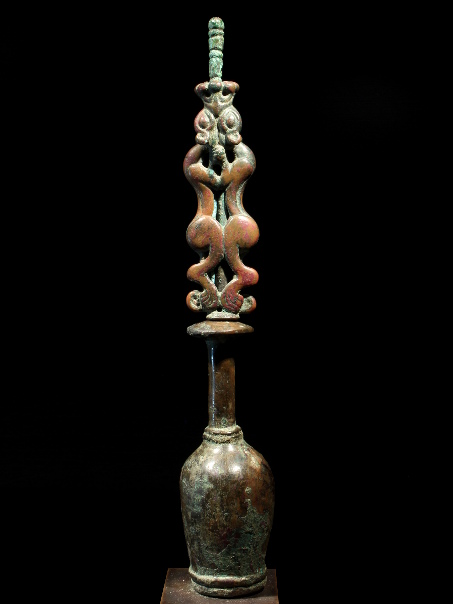 Description:
A highly desirable finial or standard top, cast in the form of a tube which is modelled in the form of two rampant and symmetrical felines, possibly lions or panthers, with a rather large eye on each side of their heads. This type of finial belongs to the earliest stage of their development (see Overlaet, p. 333-334 and figure 5).

Interestingly, and almost modern, the side profiles of the animal heads form an additional head, which is easier to detect once one looks at the eyes of the two animals and considers them to be the two eyes of one person. The backs of the felines then become the shoulders and torso of this figure, and its lower part seems to be that of an animal, with crooked legs, a phenomenon that can frequently be observed on such standards, especially those that belong to the later category of what has often be called (confusingly, see Moorey 1971, p.154) the "Master of the Animals".

In ancient times such objects would have been joined to a separate standard, a pole or other support. In this case it is supported by a tapering bell-shaped stand, which may or may not be originally belonging.

Size:
Height circa 24 cm without the modern base.

Condition:
In excellent condition with a deep red-brown patina and some blue-green encrustration. The pin has been replaced by an ancient straight fibula. A beautiful example, on a custom made square metal stand.