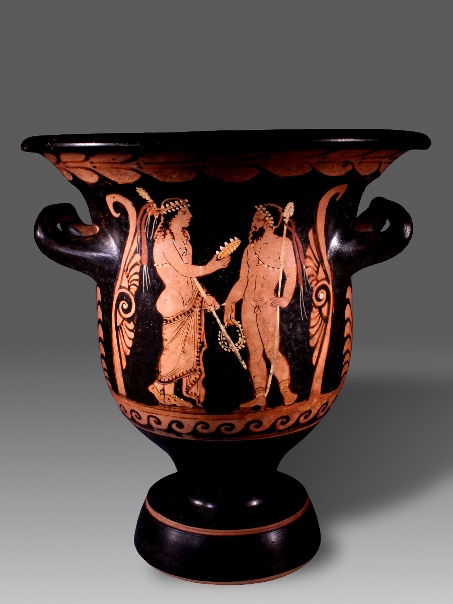 Description:
A superb red-figured krater from Poseidonia (Paestum), attributed to the painter Python. On the front we see the god Dionysos, looking youthful with long locks of hair, falling on his shoulders, and wearing a wreath. His mantle, ornamented with a dotted-stripe border, is wrapped around his lower body, beneath the hips and resting on his left arm.

He carries a thyrsos (a staff, made from giant fennel (ferula communis), with a pine cone and sometimes covered with ivy); the staff is wound with taeniae (ribbons or fillets); it is a symbol of prosperity and fertility and is especially associated with Dionysus and with maenads and satyrs, the followers of the god.

With his other hand he offers a laden bowl, probably a patera or phiale, to the person opposite him, who is shown in a three-quarter attitude. This is Silenos, the usual companion of Dionysos, who according to some texts was also his tutor. It is also possible that this is one of the sileni, the elderly daimones in the following of Dionysos, fathers of the satyrs and sons of Silenos.

Silenos is usually shown with a full beard, as is his offspring. In the Python depiction, he is naked and, like Dionysos, he is wearing a wreath and carries a thyrsos, wound with a taenia; another wreath, or possibly a necklace of white beads, dangles from his right hand.

As on most kraters, the reverse shows figures that are commonly called “draped” or “mantled” youths. Many of these, when painted by Python, are not only wearing a himation (quite often with an ornamented border similar to that on Dionysos’ mantle), but also shoes, and have their hands in a position that is more or less identical, partly invisible under their cloaks.

The figure on the left is standing at ease in a three-quarter attitude looking at the man in front of him. This second man holds a sprig which he seems to be presenting to the man on the left. On other vases the hand is sometimes empty, but raised in a similar way, which has been explained as a gesture indicative of speaking. Both figures lean against a white stick.

A floral decoration occupies the space below the handles, consisting of palmettes; enlarged scrolling tendrils are completely separated from the palmettes, and are used as a frame for the scenes on each side of the vase, a practice that may be said to characterise Paestan bell kraters of the developed phase (about 340-330 B.C.; see McPhee 2006).

A horizontal band of wave pattern forms a ground for the figures; the same can be found on other examples from Python’s workshop. A laurel band is painted along the outside of the lip, echoing, as McPhee points out, the real garlands that were worn and hung up at symposia. Details were added in white, yellow and red.

Background information:
A bell krater is a vessel for mixing wine and water at a symposion, but some were also used secondarily as a grave markers or as an urn to contain cremated remains. Our krater has a standard shape: a deep bowl with a flaring lip and two handles that curl upwards, the whole on a tall stem supported by a broad foot.

This krater was made in Poseidonia, an ancient Greek colony named after Poseidon, the god of the sea, but better known today under its Roman name, Paestum. The remains of this city can be found circa eighty kilometer south of Naples. Greeks settled here in probably the late seventh century B.C., and soon the place became one of the most important Greek colonies. Vases from this location usually have a rich orange, sometimes light brown colour, and often the clay contains shiny specks of mica.

The painter Python (circa 360 - 320 B.C., not to be confused with a potter with the same name who worked in Athens in the early 5th century B.C.) was one of the most influential vase painters of his day. He worked together with Asteas, who was probably his tutor and also his colleague in their joint workshop. They are the only painters of red-figure vases in southern Italy who occasionally signed their work. Two vases are known that were signed by Python, one in the British Museum (inv. no. 1890,0210.1) and one in the Paestum museum (inv. no. 21370); both were published in Trendall 1987, pls. 88-89; for the painter in general see ibid., p. 136-172; Trendall 1989, p. 202-203.