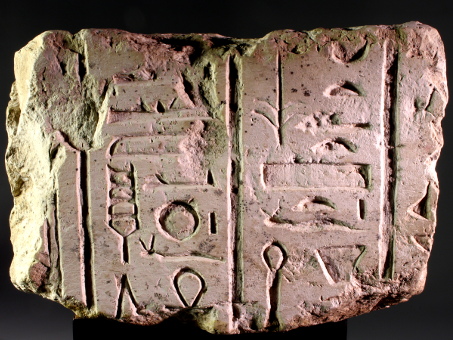 Description:
This is a limestone block of rectangular cross-section, which was most likely part of a wall, since it is inscribed with hieroglyphic texts in sunken relief on two sides. It was found in the inner room of the so-called River Temple in Akhetaten (el-Amarna), the city founded by het heretic king Akhenaten (Amenhotep IV).

The block was excavated during the 1922 season of the Egyptian Exploration Society under the direction of Sir Leonard Woolley (registration number 22, 406). It was found together with 71 fragments from the same room (22, 409). The excavation report mentions that they were “a light but unusually fine white limestone”.

The inscription on one side, consisting of two columns, reads: … in his lifetime, given life … the great royal wife, his beloved, mistress [of Upper and Lower Egypt] … The title used here for the queen (Hmt nswt aAt) is sometimes translated as “the favourite wife of the king”, as opposed to the more common title Hmt nswt wrt.

The other side shows the remains of a pair of cartouches, in the left one of which part of the name of the queen can be read: Nefertiti.

See the images from the excavation report, showing the relief in situ.

Condition:
Fragment as shown with some wear and damage; mounted on a wood block.