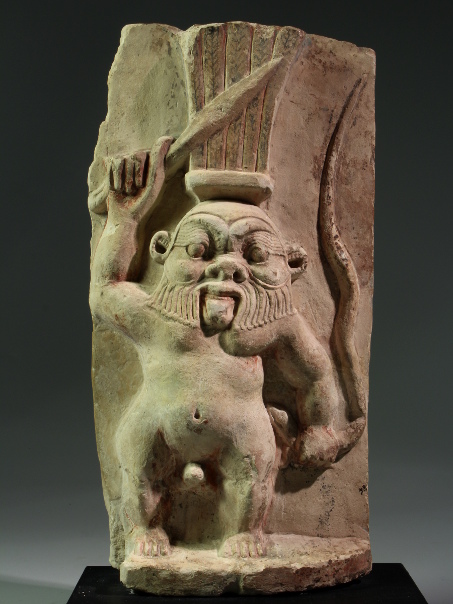 Description:
A limestone stela showing the god Bes in front view and nude. He is depicted in a way typical for the god, as a bandy legged deformed dwarf (or, more precisely, a lion-man). He has an ugly, grimacing human face with a protruding tongue and wide eyes, round, lionine ears and animal hair or manes. He is wearing a crown, consisting of a cavetto cornice and five feathers or plumes, the ribs and veining of which are indicated. Although depictions of the god are much older, the headdress was first added as an element of the iconography of Bes in the 18th dynasty (Romano 1989, p. 78-79 and 101).

Bes is brandishing a sword in his raised right hand to ward off any danger. In his lowered left hand he is grasping a scaled serpent, its long tail curling up; by doing so Bes demonstrates that he controls the forces of evil, in this case embodied in the snake.

An almost identical depiction of the god can be found on a limestone stela in the Metropolitan Museum of Art, New York (Accession Number 22.2.23), see Allen (2005), p. 23, no. 11 or this link. Yet another parallel is to be seen on a limestone stela from the Ptolemaic Period in the Brooklyn Museum, New York (Accession Number 58.98). Here Bes is shown next to the god Tutu, who appears as a sphinx; both were powerful gods.

The function of such stelae is not quite clear. Obviously they had a defensive function, but the context is unknown. Possibly they were intended to guard a house, or more precisely the bedroom; it is also possible that they had a special task in protecting a mother, perhaps birth-giving, or a child. It has also been suggested that they were votive offerings placed in a temple, expressing gratitude for protection against dangers, illness or misfortune.

Background information:
There are several opinions concerning the origins of Bes, and the meaning of his name (see Malaise 1990, p. 691-692). His name may be related to verbs meaning “to initiate”, “to emerge” or “to protect”. But is has also been suggested that the word indicates a prematurely born child or foetus (which was enveloped in a lion’s skin), making the god Bes the personification of such a prematurely born child, which also helps to explain why he is especially engaged in protecting mother and child (see Meeks 1992; Bulté 1991, p. 102, 108-109; Te Velde 1995, p. 330).

Images of deities or demons holding a knife were relatively common in ancient Egypt. They can be found in funerary compositions, but also in the realm of the living. Well known are depictions of gods wielding a weapon on ivory wands from the Middle Kingdom, but they are also present in the form of amulets and can be found on furniture, such as the legs and footboards of beds, on chairs and headrests. Such deities are usually holding a weapon with their hands, but sometimes also with their feet. Usually they are armed with a knife or sword, but in some cases with other weapons like a spear, a mace or a staff, or even a snake.

In the majority of cases the god depicted is Bes. When his name is mentioned, the frontal Bes often is called Aha, which literally means “the fighter”.

Condition:
Small areas of damage to the top and the lower left hand side; minor damage to the crown, the right hand, the knees, and the right foot, all unimportant and as shown; possibly a small area with filling, although this is far from certain and almost impossible to tell, even with magnification and special light; some discoloration in places; traces of colour. Overall in a very good condition.