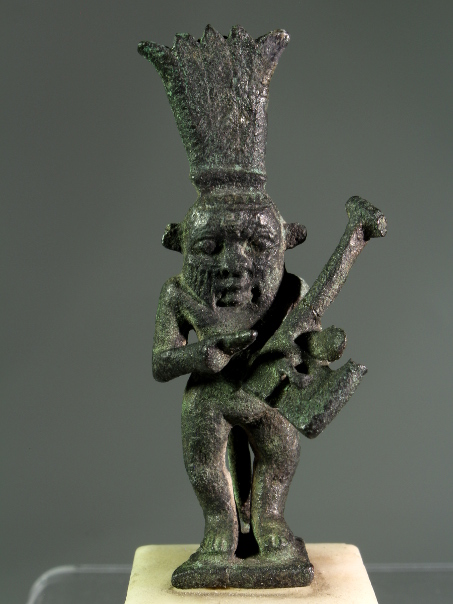 Description:
A wonderfully detailed bronze statuette showing the god Bes. He is depicted in a way typical for the god, as a bandy legged, deformed and nude dwarf with an ugly human face and wide eyes, round, lionine ears and animal hair or manes. In addition he has a long animal tail. He is wearing a crown, consisting of a cavetto cornice and five feathers or plumes, the ribs and veining of which are indicated. Although depictions of the god are much older, the headdress was first added as an element of the iconography of Bes in the 18th dynasty (Romano, p. 78-79 and 101).

Bes is here shown playing the kithara, a stringed instrument that the god used to ward off evil. His right hand is clenched with just the index finger outstretched, to strum the instrument in his left hand.

Condition:
Repair to part of the kithara, else in perfect condition with some minor encrustation.