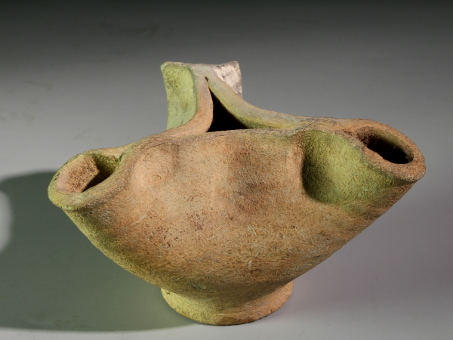 Description:
A pottery oil lamp with three nozzles. The lamp comes from Carthago, Tunisia, North Africa. Such lamps are commonly called Punic lamps. The word Punic derives from the Latin punicus, an adjective describing anything coming from the Carthaginian world.

Punic three nozzle lamps (as well as two nozzle lamps) were related to the so-called Hasmonaean lamps, which were also pinched bowl lamps. Both were derived from the Middle Bronze Age saucer lamps, and were found not only in Palestine, but also in Cyprus and North Africa.

Provenance:
Dutch collection, bought from Bonhams in London on 30 October 2003, part of lot 316; Bonhams provided the information that it comes from the collection of Professor Peter M.S. Jones, and that it was published by him in his book Collecting Ancient Lamps (2002).

Condition:
Intact with some encrustation, surface wear and scratching and some roughness to one of the nozzles; a label underneath, reading "228 Carthage (3 BC".