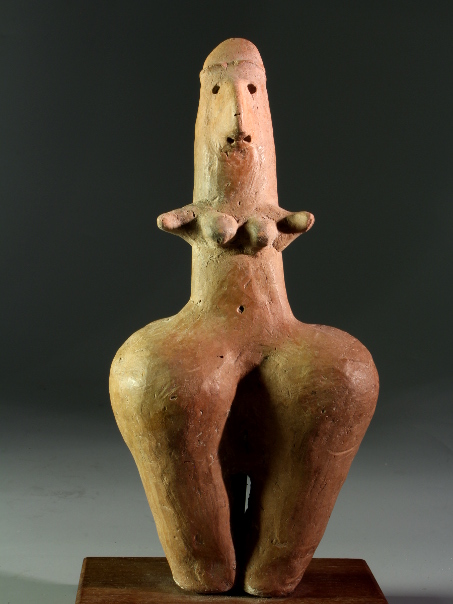 Description:
A statuette made of red-brown clay, depicting a stylised female figure, standing naked, with heavily exaggerated broad hips and thighs, and large rounded buttocks protruding behind. Her short legs are tapering and her stumpy arms are outstretched at right angles to the body. She has prominent rounded breasts, and her navel is incised. The elongated neck, almost as thick as the upper body, ends in a long head without any perceptible transition. She has a pinched nose, incised nostrils and eyes and large, protruding horizontal eyebrows.

Background information:
The term steatopygous is commonly used for these figures; the word derives from Greek stear (genitive steatos) = "fat, tallow" and puge = "rump, bottom" and is used to indicate people having excessively fat or prominent buttocks.

Condition:
Small part of the proper right arm restored (a few mm only), else intact; minuscule hole caused by sampling for the TL-test. Attached to a custom made base.