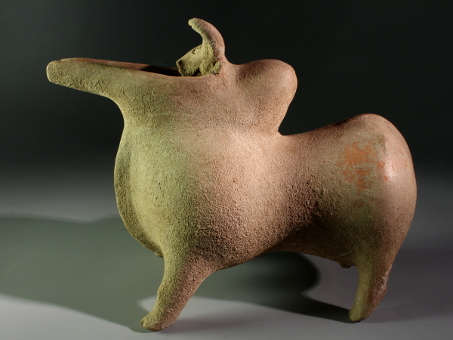 Description:
Since the exhibitions in the early 1960s, when the world first became acquainted with the so-called “Amlash art”, then recently discovered, people have been fascinated by the highly abstract and almost modern forms of some of the objects, in particular depictions of the zebu bull. It has been remarked that the ancient potters captured the synthesis of the silhouette in the spirit of an artist of the twentieth century (Ghirshman, Le Rhyton en Iran, 1962, p. 60), and that other sculpture from the area call to mind the works of artists like Picasso (Gabus 1965, p. 3; idem 1967, pl. IV).

In the case of the zebu bull, especially the hump and the horns, which constitute the most attractive parts of the animal, gave the artist the possibility to shape them in different ways. In some cases the hump was put in the middle of the back (compare Ghirshman, p. 62, fig. 5), on other representations it was more or less merged together with the head (ibid., p. 61, fig. 4).

Our bull, made of orange clay with a beige slip, belongs to a rare subclass of the latter. The pronounced hump forms the transition from the body to the head, which appears to be set onto the hump, almost as a second head. The rather small head, giving the vessel a no doubt unintended comical appearance, is located above the pouring spout which is elongated to make it possible to direct the jet of the liquid.

On many vessels the spout functions as the snout of the animal, but in this case the small head has its own muzzle. The circular, impressed eyes are located between the long, upturned horns.

The body of the bull is compact and powerful, and has elegant, curved contours. The animal stands on short, forward-angled legs. Beneath the spout a vertical rib runs down the chest, representing the dewlap. A similar rib at the rear represents the hindquarters and tail of the animal. Between the hind legs the male genitals are clearly visible.

Provenance:
Collection of Sam Dubiner (1914-1993), acquired between 1954 and 1958. Sam Dubiner was a Canadian business man, who emigrated to Israel in 1950. There he soon became a patron of the arts, opening an art gallery in Tel Aviv. He was not only interested in contemporary art, but also in tribal and ancient art. He had a special interest in Amlash pottery, of which he acquired a large collection. He sponsored archaeological excavations in the region and acquired part of his collection through the system of partage. He also bought from dealers in Iran, the USA and Europe. His last acquisition was in 1968.

Condition:
Surface with encrustation; a minuscule hole behind the left front leg, where a sample from the TL test was taken; a few millimeter of the left horn restored, else completely intact.