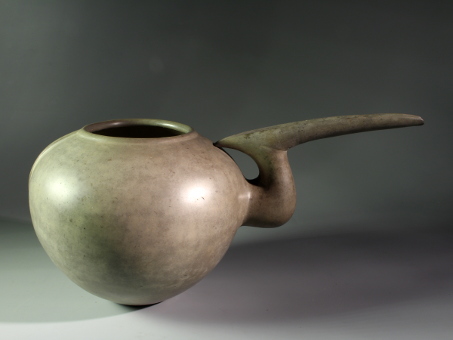 As is more often the case with objects from the Amlash region, there is an abstract, almost modern feel to it. Scholars have compared such objects to art works created by artists in the twentieth century (Ghirshman 1962, p. 60), in particular Picasso (Gabus 1965, p. 3; idem 1967, pl. IV).

In this case, when seen in profile, the vessel resembles a graceful abstract bird, with the spout representing a long beak and curving neck, and the vessel itself being the body of the bird.

Vessels with such a long spout were probably used for ritually pouring liquids in religious ceremonies, in particular in burial rites (Loukonine 1996, nos. 2, 4; especially found in burial sites: Vanden Berghe 1959, p. 123), although not much about the rituals is known. The fragility of the spout and the thin walls made them less suitable for practical purposes in daily life. The long spout made it possible to direct the jet of the liquid.

Condition:
The spout was broken in one place and has been professionally reglued with very minor infil and paint over the break (photo taken prior to the repair available upon request); two minuscule holes from taking samples for the the TL test; else completely intact with an incredibly smooth surface.